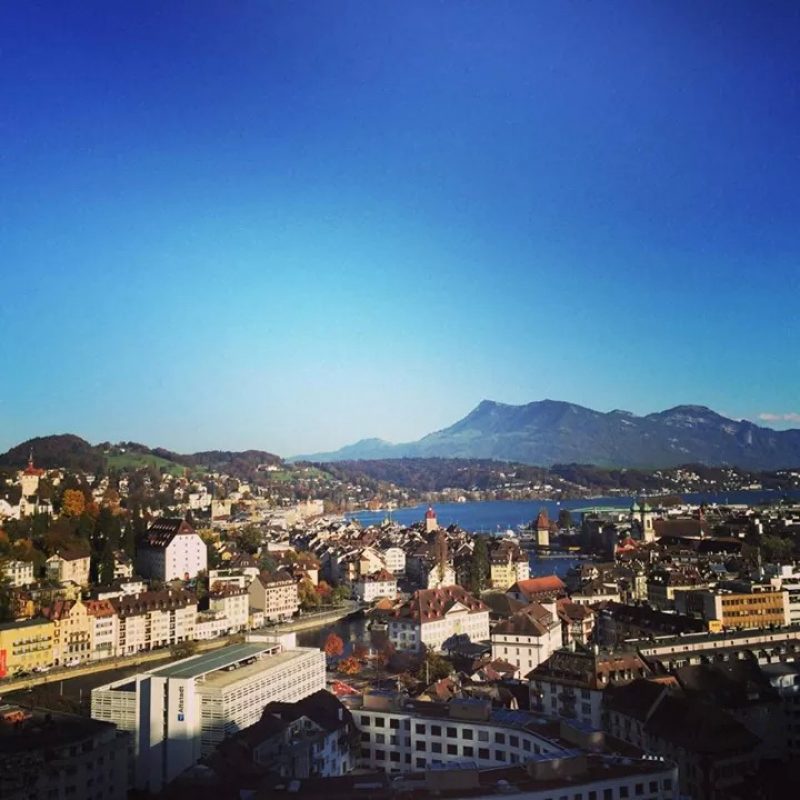 Located very close to Mount Rigi and the Rütli Meadow it is a perfect travel base to explore famous sights in Switzerland. Lucerne is also very close to many beautiful cities like Zürich and Berne which can easily be reached by train.

Lucerne itself is separated by the River Reuss. Dating back to the 8th century, the city of Lucerne is very old. The old town is tiny but beautiful and the most famous landmark is the Chapel Bridge, a wooden bridge built in the 14th century.

Lucerne’s Chapel Bridge (Kapellbrücke) was constructed in 1333 and is Europe’s oldest wooden bridge. It also is Lucerne’s most famous landmark.

The Water Tower (Wasserturm), a 43 meter tall brick tower that’s been used as a torture chamber, prison, watchtower and treasury, is located right next to the Chapel Bridge.

“The dying Lion of Lucerne” is one of the world’s most famous monuments. Mark Twaine described this piece of artwork as “the world’s saddest and most moving piece of rock in the world”.

Other sights and attractions are

Lucerne’s summer starts in June and lasts until approximately early September and sees temperatures between 20-25 °Celsius during the day, and between 10 °C and 15 °C at night. Winters in Lucerne usually see temperatures around zero during the day dropping a little lower during the night. Snow is not unusual in Lucerne although it usually snows less than in other parts of Switzerland.

Swiss Railways connects many cities and towns throughout Switzerland. There are hourly trains from Olten and Zurich Airport and half-hourly trains from Zürich, and direct trains every hour from Berne. The „Zentralbahn“ branch of the Swiss Federal Railway provides also hourly trains between Interlaken and Luzern during daytime.

Lucerne is located at the north end of the Vierwaldstättersee. There are connections to/from Schwyz, Flüelen, Weggis and other places. Please visit the Schifffahrt Vierwaldstättersee website for current timetables and more information.

The Old Town is small and most place can easily be reached by foot.

Buses also travel through the city and its surroundings. Visit http://www.vbl.ch/ for more information.

Secret Tip for all foodies and lovers of old historic buildings

The Château Gütsch is one of Switzerland’s most famous buildings, housing a grand boutique hotel and restaurant. The Château dates back to 1888 and has recently been refurbished to a high standard by star interior designer Martyn Lawrence Bullard.

The restaurant offers panoramic views of the city, mountains and the lake and has been a popular destination for locals and visitors alike for over 120 years. The Gütsch restaurant is committed to delivering outstanding, traditonal but yet extraordinary dishes and is famous for its large terrace overlooking Lucerne.