5 Must-Sees and Letdowns around Greece 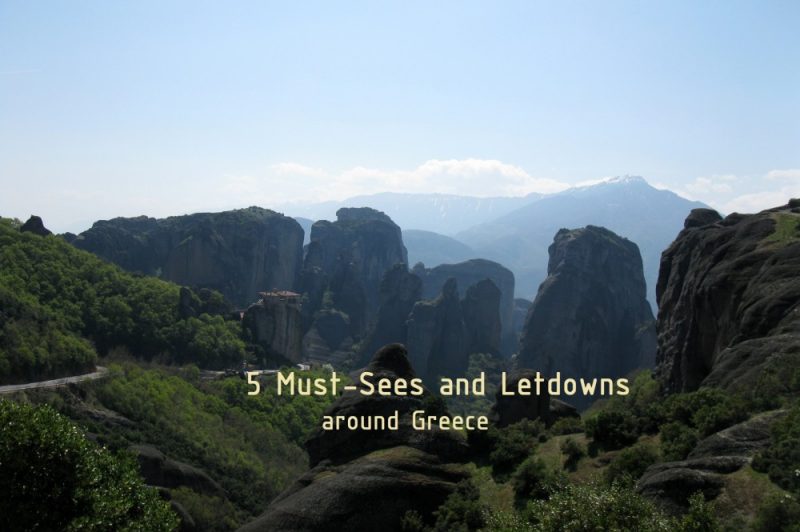 I’ve been waiting for the right time to share this post with you! I should be in Greece right now, but I had to cancel last-minute. The ups and downs of life I guess! But nevertheless let me show you my

5 Must-Sees and Letdowns around Greece!

Greece is such a diverse country in every dimension – reaching from the great islands in the Mediterranean Sea to great mountains and lovely dream-away places.

I am still stumbling and longing fo the right words when it comes to this whimsical place. Meteora literally means suspended in the air, in the heavens above or middle of the sky and is related to the world meteorite.

350 km North West of Athens lies the remote “place” called Meteora. I would rather say it’s more a magical world than a real place. If human would’ve thought about creating something like it, they wouldn’t be able to come up with a masterpiece like Meteora is.

Back in the day there were numerous monasteries to be found up on the tops of the rocks, sadly only very few of them are still intact. Six of them are open to visitors and inhabited by greek orthodox  monks or nuns.

How to get there? There are trains leaving from Athens in the morning and returning in the afternoon. When I went I remember the train tickets being very cheap for the distance we covered! Each way is about 5 hours and I recall paying some 30€ for the round trip ticket. I didn’t stay overnight there, and so I had quite little time there. But I visited all monasteries that were open on that day. Every day a different monastery is closed, so you can still visit the others without a problem. I recommend just getting a taxi from the train station that takes you to all the spots. I paid the driver 50€ for about 3 hours and we had a lot of fun!

Who has not heard of the famous ancient oracle of Delphi?! Those are the remains of it and it is still a magical place!

In the ancient world Delphi was referred to as the centre of the world.

According to the ancient Greeks, Zeus sent out two eagles to fly across the world to meet at its center, the “navel” of the world. [Source]

I completely lost track of time when I visited it. The sun was shining and I left my watch in Athens. I sat down there on a bench and started reading a great book – I don’t quite recall the title, but it must have been awesome! There are busses leaving from Athens on a regular basis throughout the day, so it will sum up to a great day trip! Make sure to stop by and visit the museum and take your time to have lunch or dinner at one of the restaurants with a terrace so you can take in the view of the valley!

On the peninsula Peloponnese, just a quick drive from Athens you’ll find the small harbor city called Nafplio. Did you know Nafplio was the provisional capital of Greece for five years? No? Me neither before I did my research 🙂

When I visited Greece a few years back I tried couchsurfing for the first time and stayed with a great guy. He offered to take me on a road trip to Peloponnese together with a friend. Of course I accepted gratefully – people are much nicer than we think they are!

We stopped at some points of interest but Nafplio is the only one that really stuck in my head. By the sea, calm, almost no tourists (maybe because I went just before Easter). Just walk, get lost, enjoy a wonderful day, have a glass of wine on the main square, walk around the coastline and get some different views on the castle Bourtzi, which is located just in front of the city in the sea.

A short day trip away from the capital Athens, you can arrive there by bus which also leave on a frequent basis to and from Cape Sounion. I have to admit that I was very disappointed.

Cape Sounion offers a nice view and the ride to get there takes you by the sea so it’s not a completely waste of time, but the Temple of Poseidon is just a better ruin. There is nothing else to visit except for the temple, which you are not allowed to enter only walk around. Only go there if you have plenty of time! I’d recommend visiting one of the islands instead!

According to legend, Cape Sounion is the spot where Aegeus, king of Athens, leapt to his death off the cliff, thus giving his name to the Aegean Sea. The story goes that Aegeus, anxiously looking out from Sounion, despaired when he saw a black sail on his son Theseus’s ship, returning from Crete. This led him to believe that his son had been killed in his contest with the dreaded Minotaur, a monster that was half man and half bull. [Source]

Big, noisy, dirty – this is Athens. Or what is left of it.

I’ve always wanted to go and visit the great and historic capital of Greece. So many stories rank around it. I was busted when I first walked around.

Dust, graffiti on once beautiful walls, the main sight, the Acropolis, is/was scaffolded, people trying to steal from me, … Sorry grey Athens, you truly disappointed me, you lack some colours to me!

What is your experience on travelling Greece? Let me know in the comments below!