Some drink beer, I bathe in beer – Beer Spa in Prague 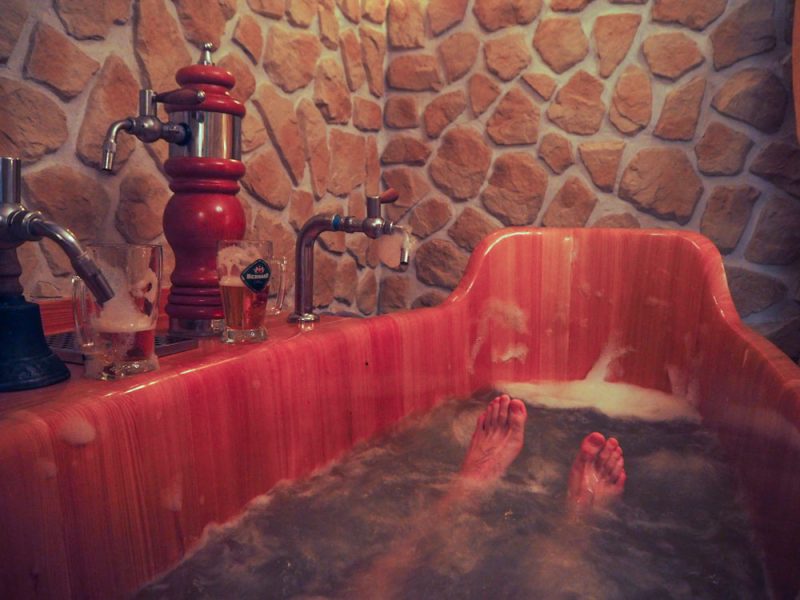 The story of how my love for beer got even deeper

The Czech Republic is known for its beer, many beer lovers go on a holy pilgrimage to their Beer-Mekka. Breweries can be found all across the country and you will also love another thing about it: Beer is cheap here and it comes in just so many different colors and tastes that won’t leave you wanting more (maybe less, but that’ll be up to your consumption).

I started planning the trip to Prague a few weeks before the actual trip. I tend to book last minute and leave as much up to coincidence, but this time I wasn’t travelling solo and wanted to make an impression. I threw myself into the endless universes of the internet and soon found some pretty interesting and fun things to do. I’ve read about beer spas before, but never made the effort to look it up and find out where they were located. I was thrilled to find out that there are at least two different beer spas in Prague. I enjoy an occasional glass of beer, but the person I would be travelling with is a beer enthusiast. After looking up the two different spas I opted for the one with massages instead of a sauna.

The Bernard Beer Spa in Prague

There are two locations of the Bernard Beer Spa and due to availability I chose the Beer Spa 2 located on Fügnerovo nám. 1806/1, Nové Mêsto. I didn’t tell my bf (the beer enthusiast) what we were about to do, in fact I didn’t tell him anything about the weekend. I asked him not to make any plans for the weekend and gave him a packing list. I gave him little hints and when we arrived I handed him an envelope with the instructions to find the metro station I. P. Pavlova. Once there he got a printed map with the way to the spa. Before we entered I gave him the voucher. As his eyes widened with joy when he read the lines.

As we entered, Ivana welcomed us warmly and started explaining the procedure. There were lockers to leave our things as well as sheets that we used as towels.

Wrapped in warm sheets Ivana opened another door and led us to a small cosy room. There were three wooden pools, all of them able to fit two people. One of them was already filled with bubbly, steamy water. And a LOT of foam!

Ivana explained that we wouldn’t bathe in 100% beer, but in hot water with all the components of beer. Bathing in pure hot beer isn’t really good for you because of some chemical reactions that would not benefit you.

She held a big bowl with greenish ingredients – hop, malt and others – and then poured it into the wooden tub.

Two glasses of beer already awaited us as well. Unlimited draft beer consumption included! The tab was just right next to our tub.

The water was hot and after having walked out in the cold winterly temperatures it was time to heat up again. Some of the greenish ingredients floated around beneath the mountains of foam. Childish as always I started playing with the foam and soon it was gone. The draft beer was of excellent taste and surely we had more than one.

We enjoyed the hot beer tub for about half an hour when Ivana signaled us to get out and wrap ourselves in the sheets provided. In the next room she bedded us in heated beds to intensify the effect of the beer ingredients on our skin. Her recommendation was to not shower for at least 24 hours to obtain best results. (We didn’t listen to her and got a shower afterwards.)

We got our massages then one after the other and finally were able to really relax after a busy week at work.

This was the perfect start into a great weekend in Prague and we’ll definitely be back again soon!