A beery & culinary trip to Flanders 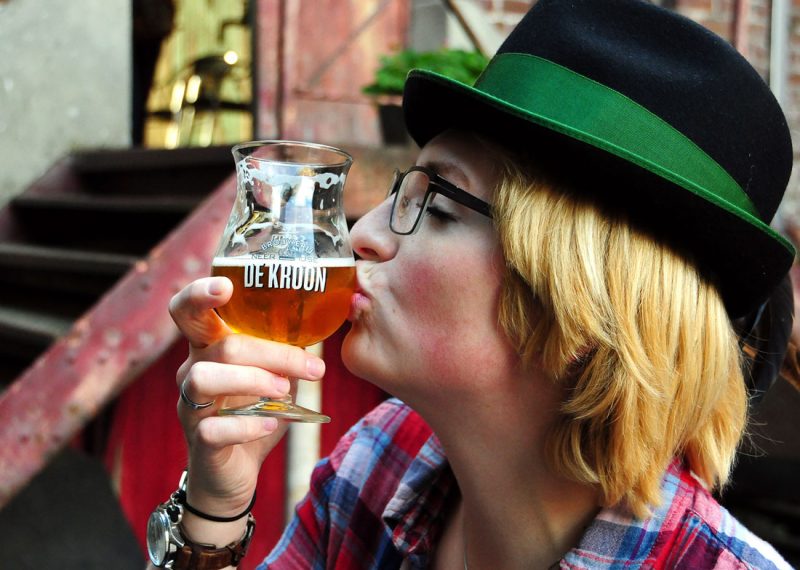 Where should I begin? In this post I want to take you on a culinary trip through the Belgian region of Flanders. (It’s the Northern part of Belgium where they speak a mixture of German, English, French, … and call it Flemish – if you are native to one of the before mentioned languages it will make you giggle when you first hear them talk.)

I want to introduce you to some of the breweries, their beers, restaurants and other beery occasions that I visited on my trip to Flanders:

Herzele is wonderful, little town and it was my first stop after arriving at Brussels airport. It looks like a medieval town and I would not have minded spending the entire trip here.

This small family owned brewery was founded back in 1886 just across the church in town. In this time it was the women’s job to brew the beer.

De Ryck brewery uses their own spring water for their different types of beer. They brew for two days every two weeks, then the beer will be stored for a month before being sold (and enjoyed).

I especially enjoyed the Arend Dubbel beer which is dark and tastes a bit like caramel.

Just a short ride from Herzele you’ll find also a very warm and friendly town that has a great restaurant that uses local beers for their dishes:

This modern restaurant is run by two Belgian chefs that really, really know what they are doing. I could neither resist the yummy “sushi” like starters nor the soup nor the Flemish Goulash.

Best to reserve a spot and please note that C-Jules is closed on Mondays and Tuesdays.

On my second day I decided to give Mechelen a shot and – again – completely fell in love. How was it possible that it had taken me 22 years to finally make it to Belgium and especially Flanders?! *sigh*

Mechelen is all about bridges, water, the prettiest houses and cute little squares. Again, I could see myself living here. But let’s get back on track and find the beer here:

The brewery itself is still run by the same family in the fifth generation. They use only Belgian products for their beers and eventually started to make Whiskey as well. The beers are being exported to more than 30 countries now and have also won several international awards. Take a tour through the old part of the brewery and learn about the process of beer-making.

… serves beer from micro-breweries on the main square of the city.

Meet Mr. Freddy Delvaux aka the Beer Professor. He spent most of his life researching, drinking and brewing beer. He is a genius when it comes to beer.

When I first met him and heard him talk, I thought to myself “He must have fallen into the beer brewing pot when he was little“. He speaks about beer with the highest enthusiasm possible and doesn’t lack in humor either.

Three different beers are constantly brewed here, some others depending on demand and the season.

… a great place to try maaaaaany, maaaaannnnyyy different beers in a cool atmosphere.

This part of the trip was simply the best. Why? I was able to prove my best skills: eating and drinking! Jk!

I took part in a beer and chocolate pairing workshop at a local chocolatier – Antoine by Patrick Aubrion.

Patrick walked us through the steps and why chocolate and beer go so well together. The variety of both beer and chocolate.

Did you know that champagne beer goes well with strawberry truffles?

Did you know that beer with sour cherry, such as the Oud Beersel Oude Kriek, goes well with bitter chocolate?

Did you know that the fruity Delvaux beer goes well with a truffle called passion – with passion fruit?

Did you know that a dark beer, such as the Alpaide, works amazingly well with banana truffles?

Well, now you know – but believe me, you really want to try all of them yourself too! Words are great, but real chocolate and beer are better 🙂

Not too far from famous Manneken Pis you’ll find a very comfy restaurant that feels like a big living room and not like a restaurant. The furniture and the whole setup is perfect for a rainy day or dinner with friends.

Their specialty is to cook with local beers and serve Belgian beers as well. If you are in Brussels, make sure to stop by.

Did you know that back in the medieval times it was the women’s job to brew beer?

I travelled to Flanders not solely for the beer, but also because I wanted to understand the connection of women and beer. People always say beer is not for women, and my mom says Don’t drink beer because of the many calories. There are so many assumptions about beer being for men only.

I attended a workshop on Women & Beer in Mechelen at the Het Anker brewery. There I met Sofie Vanrafelghem, a world-known beer sommelier and initiator of Women & Beer. She travels around the world to pair food and beer for a living.

She wasn’t always fond of beer though; in her family there was never a drop of beer in sight. She preferred wine and cava for a long time, but then discovered the tasteful and tremendously large world of beer.

She started her research, drew lines and successfully came up with workshops on Women & Beer. She attacks prejudices and inspires women to try to go for beer instead of wine or other drinks. Sofie even called herself a white wine bitch.

Then Sofie and her team created Eva – a beer made by women, made for women. They based the flavor on feedback they got from women around the world. With its fruity taste of citrus and grapefruit it replaces cava as an aperitif.

As for me: Every now and then I do like to drink beer, not because I wouldn’t like it too much but because of the way they serve it in Austria: usually big glasses that don’t look very feminine or elegant. In Belgium it is soooo different: beer is served in small beautiful glasses that we’d use for spirits. I couldn’t resist taking some of those fine glasses back home to enjoy great beer in even greater glasses.

Note: Thanks a lot to the amazing support of the Flanders Tourism Office for organizing this truly inspiring and insightful trip to Flanders – and introducing me to more types of beer than I can remember. Susanne, cheers to you!