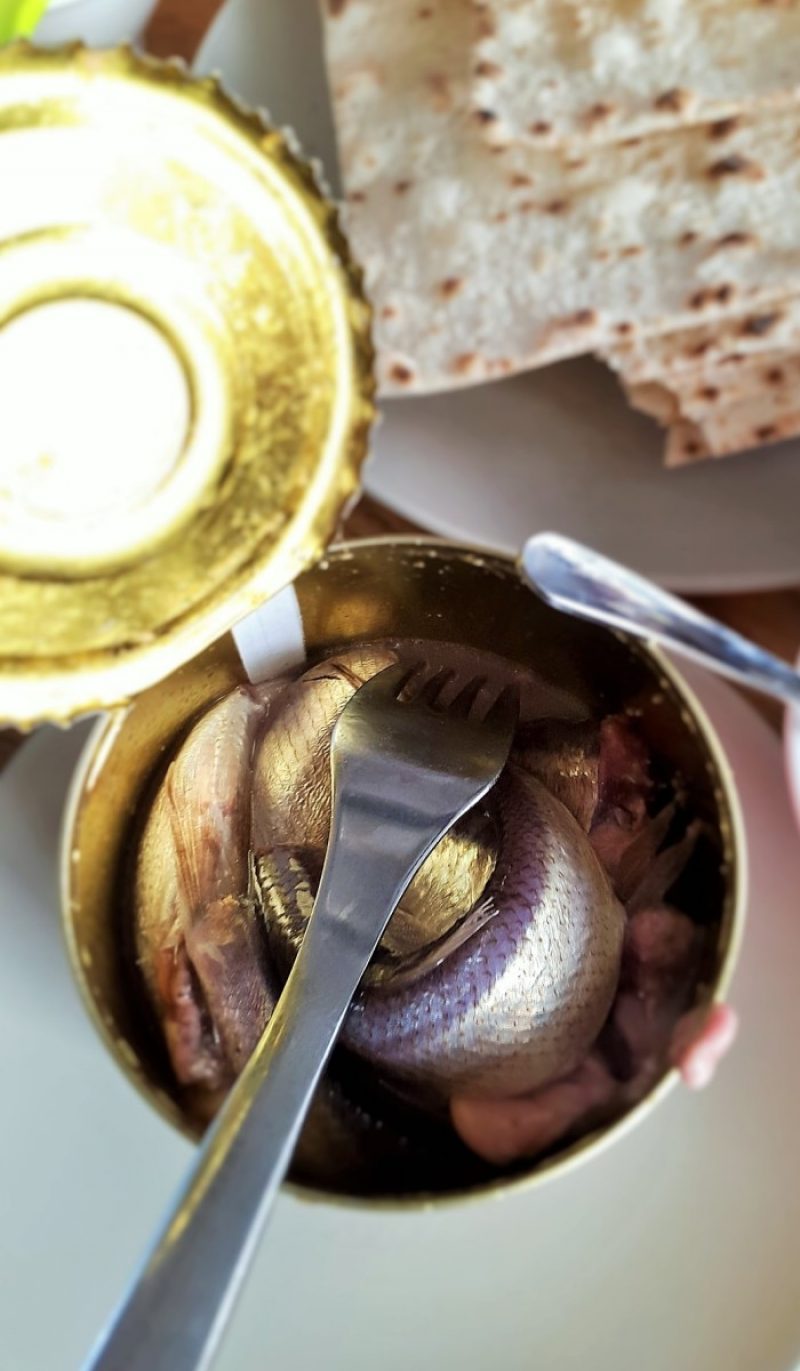 After visiting Sweden some years ago and falling in love with this amazing, diverse Scandinavian country I returned in February this year. Since one of my dearest friends is from Skelleftea we decided to go on a road trip and concentrate on the most Northern part of her home country. We spent a night in snow and ice in Jukkasjärvi, visited and shopped at the traditional Sami market in Jokkmokk, spent a relaxing evening in Lulea and had a Surströmming dinner in Skelleftea with her family.

The herring are caught in April and May when they are in prime condition and just about to spawn. Prior to spawning, the herring have not fattened. They are then put into a strong brine for about 20 hours which draws out the blood, the heads are removed and they are gutted and put into a weaker brine solution. The barrels are then placed in a temperature-controlled room kept at 15 – 20 °C. Canning takes place at the beginning of July and for five weeks thereafter. Ten days prior to the premiere the final product is distributed to wholesalers.

The fermentation of the fish depends on a lactic acid enzyme in the spine that is activated if the conditions are right (temperature and brine concentration). The low temperature in Northern Sweden is one of the parameters that affects the character of the final product.

Fermentation continues in the can which causes the can to bulge noticeably. Prior to modern canning methods, surströmming was sold in wooden barrels and was only consumed locally. As even the smallest one-litre kegs could leak, surströmming was bought directly from the producers in small quantities for immediate consumption.

Half a year to a year later gases have built up sufficiently for the once flat tops of the cylindrical tins to bulge into a more rounded shape. These unusual containers of surströmming can be found today in supermarkets all over Sweden. However, certain airlines have banned the tins on their flights, considering the pressurised containers to be potentially dangerous. Species of Haloanerobium bacteria are responsible for the in-can ripening. These bacteria produce carbon dioxide and a number of compounds that account for the unique odour: pungent (propionic acid), rotten-egg (hydrogen sulfide), rancid butter (butyric acid), and vinegar (acetic acid).

Well, the first time I was offered Surströmming I refused to even go near it! Why? Because it stinks! Imagine the smell of off fish and rotten eggs – that’s why Surströmming smells like. The second time I was in Sweden my friends family kept daring me to finally try the herring myself and since I didn’t like to be called a coward no more I finally gave in.

How to eat Surströmming:

I strongly recommend having Surströmming in the summer months. It really leaves a strong odour around the house for days. I visited Sweden in February and hence why we had our sandwiches indoors. It would have been way too cold to eat outside 😉 unlucky!

As Surströmming has a really potent smell and also taste I would never ever have it “plain”. Only the combination of Swedish thin bread, potatoes, tomatoes, onions, sour cream and of course Surströmming makes it edible. One other thing that really bugs me is having to disembowel and skin the fish before eating it. Yuck!

In 1981, a German landlord evicted a tenant without notice after the tenant spread surströmming brine in the apartment building’s staircase. When the landlord was taken to court, the court ruled that the termination was justified when the landlord’s party demonstrated their case by opening a can inside the courtroom. The court concluded that it “had convinced itself that the disgusting smell of the fish brine far exceeded the degree that fellow-tenants in the building could be expected to tolerate”.

I survived! No, all jokes aside. I have to say that it tasted a lot better than it smelled… It was just really, really salty and my tip is not to breath in through your nose at all. I had two sandwiches (half a fish on each) and enjoyed them. I am proud to be able to say I tried Surströmming but will probably never have it again!!

Now, would you try it?