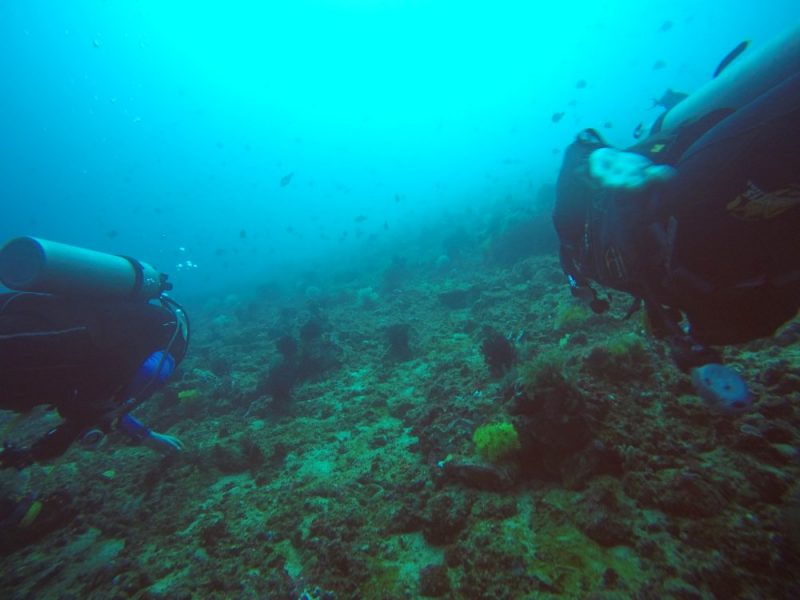 or the importance of proper dive briefings and knowing your limits

I had finally arrived in Bali. One of the most talked about islands since the book and movie Eat, Pray, Love by Liz Gilbert got well-known around the globe. I wanted to see everything and experience the island the best way possible. For me this surely includes the ocean and therefore diving.

My flight to New Zealand got cancelled due to a volcano eruption and too much ash in the air. Air New Zealand doesn’t fly daily so I got a ticket for a flight a few days later which meant one more week on Bali.

I called up some dive shops and asked around whether they had a free diving spot on their boats for the next day. My second call was already a success. I hung up the phone happily as I just had booked myself two tanks for tomorrow at the Gili’s. What I thought were the Gili Islands was much rather a dive spot on Bali called Gili, but I wouldn’t find out until the following day on the boat.

I had to get up early to make it to the dive shop in time as I stayed in Kuta and the shop is located in Sanur. I got there too early because I had expected much more traffic at this time of day. I was greeted warmly, paid for my dives, signed the usual release forms and got my rental equipment. Afterwards I got introduced to the dive guide and my two fellow divers from Spain and Holland.

As much I love working as a Divemaster sometimes it is nice being a customer too – not having to carry the heavy tanks, not worrying about bringing spare gear and entertaining the divers.  After they got everyone ready and fully equipped we got on their blue bus with orange logo and took off. The ride was an hour long, first we talked for a bit but then everyone just doze off to dreamland.

We got to a small village where the boat already awaited us. It was one of those colourful Balinese boats that look like grasshoppers. How exciting is that! I had just seen them on the beach and now I’m about to go on one!

First problem occurred: the engine simply didn’t want to start and take us to our dive site. It took the captain and two others about 15 to 20 minutes to get the engine roar again. Ugh, I don’t like it when the dive boats aren’t in good shape. Good thing this happened on shore and not out on the ocean.

A thirty-minute boat ride later we all got ready, the dive briefing was the shortest I’ve ever heard and went something like this: “We go down. Stay about 50 minutes. Max depth maybe 30 metres. Signal when have half tank. A bit current.” And off we went rolling backwards into the water. No buddy check was held, I could check my BCD before getting into the ocean, but that was it. Everything was fine with my equipment but the low-pressure hose wasn’t connected to the BCD of one of the other divers. Another reason why I like to put together the equipment myself, but they told me not to worry about it and did it themselves.

I sensed a bit of a current on the surface, but as we went down to 25 metres the current was extremely strong. It felt like one of those counter-currents in swimming pools. I thought it would get milder as we went even deeper to approx. 30 metres. It got worse. And worse. I’ve never experienced such a strong current pushing us deeper and deeper.

Our guide signalled us to swim against the current in a horizontal line. It was almost impossible to move forward. I usually frog kick underwater, but this time it was not possible and I just kicked like a crazy person to avoid getting flushed into the deep, deep ocean.

It was exhausting, but somehow I managed to move forward. But it was a hard and not very rewarding one: centimetre by centimetre I moved forward. My air consumption must have been as high as never before. I knew that I couldn’t keep going like this for much longer. Plus this was not enjoyable. Diving is supposed to be fun and maybe a bit challenging but never risky as risky as this dive.

Anyway, the guide turned and told me to hold onto the corals and start climbing them instead of trying to beat the current swimming. But why? All those beautiful corals would get damaged and would die if everyone holds onto them with all their weight. Plus I don’t know all of them and don’t know which might be poisonous or too soft to hold onto. I didn’t want to destroy the fragile underwater gardens. In the end, I had no other choice and tried to find the more solid corals to hold onto. I instantly had to think of my instructor Steve in Playa del Carmen who had told me a lot about the ocean and especially watching, and never touching or teasing the sea life.

Take only pictures, leave only bubbles.

But then it got even worse. After just a bit of diving, I checked my gauges and found myself startled. The gauge showed 50 bar. 1/4 tank. Oh no, we were only down there for 10 minutes. For the next 5 minutes I tried to catch the guides attention by banging my tank and waving. He didn’t turn around a single time. He couldn’t hear me. He was wearing a hoodie – which influenced his sense of hearing. I wanted to scream so loud, but of course, underwater it just makes no sense.

We were too deep to just go up without a safety stop. I was the last one in line – by the way no buddies were assigned before – so I gathered all my remaining strengths and kicked hard to reach the guide’s fin and grabbed it. Then he finally turned around. I grabbed his yellow alternate reg and took some deep breaths. Breathing off my own tank had already gotten very hard. He looked at me in wonder. I showed him my gauge and he just looked at it in wonder. He shook his head in disbelief. He still had plenty of air and so I was good for now. He didn’t let me hold onto his hand as you usually do when breathing off an alternate air source. I had a hard time keeping up with him and decided to simply get a hold on his tank. It felt like he was trying to get rid of me because he turned around many times and moved very unusual.

This was too much. I thought the guide had already started our ascent but that wasn’t the case so I signalled him with a very angry and frightened expression on my face to start going up immediately. Finally, I got him to shoot the buoy. He used his rail to tie it to a coral (poor coral!!!) for our safety stop at 5 metres. He told me to switch to my own regulator and use my own air. I did what he said but I was very concerned whether it would be enough or not. Breathing was hard work, I sucked the air out of my tank and the breathing got heavier and heavier.

From the corner of my eye I saw that the Spaniard was out of air and went up without even starting the 3 minute safety stop. The Dutch diver was too far away to share his tank. So this was the only thing he could have done. He also tried to signal the guide the remaining air in his tank, but the guide was not paying attention.

We completed the three-minute safety stop and while ascending the last few metres I emptied my tank. I orally inflated my BCD to float. I was angry at the guide but happy to be on the surface and breathing fresh air.

We got back on the boat and took off the gear. We were supposed to do our second dive very close by at a similar site with the same strong currents. I told the guide that I wasn’t going back down if we did that spot he was talking about. The other two divers agreed with me. It hadn’t been a  pleasant dive for them either. The guide and the captain then suggested to go to a different spot called Blue Lagoon, which is located not very far away. And most importantly: no strong currents!

The Spaniard was concerned about missing the safety stop and the guide told him that it was not necessary for this dive. I looked at my depth gauge that indicated a max depth of 31 metres. I know that I checked it underwater several times as well and we were at 31 metres for most of the time. This requires a safety stop. Over and out. Safety stop. They weren’t invented to tease divers but to help them get rid of the excess nitrogen.

Luckily the Spaniard was fine throughout the day.

I was stupid enough not bringing my own dive computer but I checked the guides one when I held on to his tank. His computer also indicated that a safety stop was necessary.

This day will stick in my head for a long time, I truly hope you will never experience anything like that.