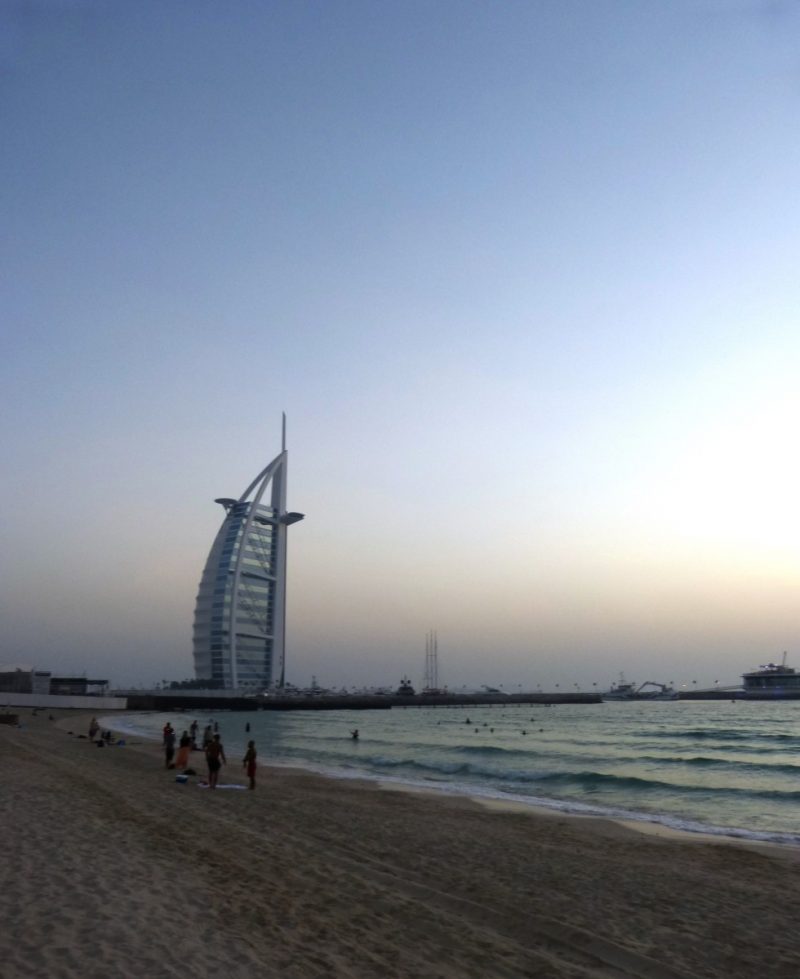 It is time to say „Dubai“

… that’s what one of my mates said in June last year. We had just decided to go on a short trip away. Wanting to take advantage of being able to fly at a reduced fare on Austrian Airline flights we chose DUBAI as our destination!

Day 1: On 7th of June 2014 we took the !very! early morning train to Vienna at 5:45 am (aw how I hate getting up early in the morning). After taking the bus from Vienna Westbahnhof to Vienna International Airport at 1pm we boarded the plane to Dubai! Once on the plane we were assigned Emergency Exit seats at no extra cost – yay we thought – but to be honest with you, never in my life would I pay for those seats! You cannot lean on anything to make yourself comfortable and get some sleep, the entertainment screen is on the wall in front of you and worst of all it is very drafty!

The food was nice tho – I had a meat burger (Fleischlaibchen) with potato puree & spinach with a small side salad for main. Dessert was some yoghurt with raspberry puree & coffee.

Once we arrived in Dubai we had to queue in line in order to get our passports stamped. Since this was my first visit to the United Arab Emirates I was a little intimidated by the Emiratis in their traditional clothing. I got trough customs ok tho and was very happy to have another stamp in my passport.

It was getting really late by then and travelling by plane always exhausts me for some reason so we decided to head straight to our hotel. Check-In went smoothly and we were really happy with our room.

My favourite place in the Hotel was definitely the rooftop terrace! I loved basking myself in the morning when the heat was still bearable (35 degrees C) and even got a wee tan out of it (usually I just go red and then white again).

Day 2: After getting a good nights sleep & some sun we decided we wanted to try some Arabic food! We went to a Lebanese place that was suggested to us by our hotel receptionist and once we got there we were warmly welcomed by the staff (we only met nice people in Dubai!!). They helped us choose something from the menu as we hadn’t even heard of most of the dishes.

After lunch we decided we wanted to see the Dubai Museum. We asked the waiter for directions and he told us it wasn’t very far. We decided to walk there – which was a bad idea. Walking in over 40 deg C is exhausting you know lol The museum itself was really interesting and super cheap. We paid 3 Dirhams (60 cents) for a ticket.

Day 3: Having learnt our lesson from the day before we decided to take the metro to the Mall of the Emirates. Dubai currently runs two different metro lines – the green and the red one. Dubai has the first ever automatic metro which means there is no driver. It is all computer run. Amazing eh? After a short ride we arrived at the Mall of the Emirates. With both of us not being “enthusiastic shoppers” we just had a quick look around and went for some food and coffee. I never used to like Indian food but the food we had in Dubai completely changed my mind.

The worlds biggest indoor skiing facility is also located in the Mall of the Emirates. We just had a quick look at it from the outside.

We then took a taxi to the Atlantis hotel. It being located on “the Palm” it is an absolute must see! The hotel itself is massive and really nice. But way out of my travel budget.

We went to the Aquarium which was nice but nothing extraordinary.

On our last stop before going back to the hotel we went to see the Burj Al Arab. Well not from the inside as the entrance is guarded. And again way over my budget. We went for a walk along the public beach and took some photos.

Day 4: Like you probably already know Dubai is home to the biggest shopping mall in world. The Dubai Mall.

Of course we went there and had a little nosey around but it is just like any other shopping mall just bigger. And freeeezing cold. I have never been as cold anywhere inside a building as in Dubai. No wonder you never see the locals wearing short sleeved tops.  Pretty soon we were all shopped out but decided to stick around for Dubai’s famous Water fountain show just outside the Dubai Mall. We also got some pictures of the world’s highest building – the Burj Khalifa. We did not bother going up the top as it was really expensive and you have to queue forever.

The best part of Day 5 was spent relaxing by the pool in our hotel. It is just too hot in the summer to do anything outdoorsy during the day. Around 5pm we headed to Deira to visit the old Gold Souk. People sell clothes, jewellery, spices, food and more there. After a wander around and a bit of souvenir shopping we had an Indian meal on the street and it was just delicious (much better than the food I had in restaurants). Really cheap too. I had chicken curry, chai tea & a bottle of water for 3 Euros!

Day 6: With our flight out of Dubai being at 1:30 am we had a long lie in on our last day to catch up on some sleep. Afterwards we spent more time by the pool & went for some coffee. Then we headed back to the airport as we had to be there well before our departure to check ourselves in and wait for boarding.

All in all it was an amazing, spontaneous trip away. It was just way too short!

PS: Viki was in Dubai as part of her Traum.Welt.Reise this summer. Check out related posts below to find out more about her ventures.