Jerusalem from a different angle: A somewhat different city tour 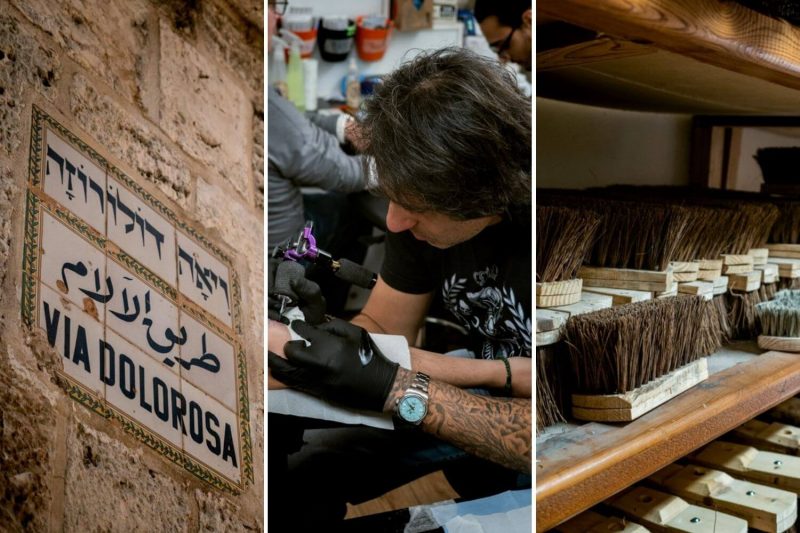 Jerusalem. The Holy City. This place is far more than the colossal buildings we know primarily from history books and the news. It is more than the Christian, Muslim, Armenian or Jewish quarters. It is not just the Church of the Holy Sepulchre, the Wailing Wall or the Temple Mount. What makes Jerusalem unique are the people who live here. It is their stories that touched me on my last trip.

On my last trip to Israel, I had the incredible pleasure of meeting a true storyteller and Jerusalem connoisseur. Eitan Simanor is a tour guide – and his own story could fill books. His speciality and favourite thing to do is to show curious visitors a different part of his chosen home that is Jerusalem. And he does this by meeting people who live here and who have created something for themselves here. He showed me only a fraction of this in half a day – I am still processing the encounters and am grateful to have met him.

A different city tour of Jerusalem

Eitan is a pleasant, thoughtful person who absorbs knowledge like a sponge and is able to authentically share history and stories in a very special way. For many years he was a photographer for NGOs in remote places and this passion to capture moments with his camera still accompanies him today. He knows very special places that also make photographers’ hearts beat faster.

In addition, he is always on the lookout for encounters in everyday life. He knows many people who have made Jerusalem what it is today. Each of them in their own unique way.

The art of the tiles: Karakashian family

In an unassuming-looking little shop near Jaffa Gate, history has been made for over a hundred years. The Karakashian family is dedicated to ceramics, which they paint by hand themselves. In 1919, the Armenian family, along with two others, was commissioned by the British to restore the colourful tiles of the Dome of the Rock.

Later, when the Jordanians ruled over Jerusalem, street signs were introduced in the city. Again, the Karakashian family was entrusted with this task in 1965. They made street signs on tiles in Arabic and English. It was only after the Six Day War in 1967 that the signs were changed to include the Hebrew street names. Some of the signs were completely replaced, some simply added Hebrew. You can still see the difference on many of the tiles today.

Gabriel, the icon artist of the Orthodox

Strolling through the alleyways of Jerusalem, one is simply overwhelmed by all the impressions. You often don’t notice such banal things as entrances to courtyards and pass them by. Eitan, however, is not distracted by this (any more) and knows exactly where the special corners are hiding.

So he led me into one of these supposedly hidden courtyards, past a small church. Then he knocked on a simple wooden door and waited. If I hadn’t known that he knew someone here, I would have thought he was asking for directions. He was not surprised when no one answered – after all, we were there on a Sunday. But when the door opened and an elderly man with paint stains on his hands stepped out, Eitan looked visibly relieved.

“This is where Gabriel works. This is his little workroom where he restores icons and other pictures and also paints them himself. He is also Armenian himself and on the payroll of the Greek Orthodox Patriachate,” he explained to me. Picture frames, small and large paint pots and canvases are piled up in this small work cave. Everywhere shines that special gold we know from churches.

A workplace with a purpose: Arab Blind Association

In 1932, when the British mandate over Palestine and thus Jerusalem was still in force, the Arab Blind Association was founded with its headquarters in the Old City. Through various projects, blind Palestinians are given the opportunity to work until today.

In a small, again inconspicuous little shop in one of the winding alleys in Jerusalem, the products from such a workshop are sold: Brushes and brooms in different sizes and for different purposes. Those who are interested also get a glimpse of the workshops where people are working diligently. Almost as if in a trance, the individual work steps are carried out one after the other.

The Tattoos of the Razzouk Family

The Razzouk family has been engaged in the art of tattooing since 1300. In the beginning, they undertook a pilgrimage from Egypt to the Holy Land – and then stayed in Jerusalem from the 15th century on. Here they set up a small tattoo studio that remains to this day. Especially among pilgrims, the small permanent works of art under the skin are very popular, representing a successful pilgrimage.

The ancestors of Wassim Razzouk, who is already the 27th generation of this family tradition, tattooed Copts in Egypt. Small crosses were tattooed on the inside of the wrist to gain entry to their churches. This was often done at a young age, sometimes only a few months old.

Traditionally, the Jerusalem cross or pilgrim’s cross is tattooed today. In a thick catalogue in the tattoo shop you will find further countless variations – there is guaranteed to be something for everyone.

So if you are looking to understand this often misunderstood city a little bit better, I encourage you to explore Jerusalem with Eitan and get a very unique perspective. He also runs photography workshops in the Old City – he knows the best angles and viewpoints in Jerusalem!

This article was written on behalf of the Israeli Ministry of Tourism as part of a research visit.