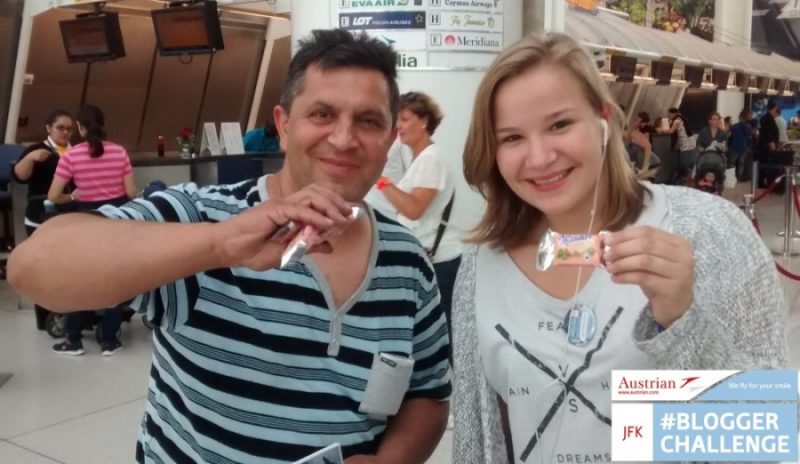 After landing at John F. Kennedy Airport in New York: next challenge!

Once the bloggers arrive at either EWR or JFK Airport, the passengers on their flights will be in for a surprise: there’ll be an Austrian Airlines Box strategically placed on each luggage carousel, the contents of which our bloggers will have to distribute amongst the passengers around them. We’ve packed the boxes with something typically Austrian for the New York passengers: Mannerschnitten chocolates!

So after the great Flashmob on board there was a lot of fun going on! I was allowed to sit in Business Class for the last half hour and enjoyed the relative huge space for my legs 🙂

and we took a last picture of the crew and me – simply love them!

So then I had to pass immigration- most people told me that JFK is horrible and the waiting at the boarder takes at least two hours. So I prepared myself but we were lucky a lot! I waited like 20 minutes maximum but then waited a lot for my backpack to find its way to me on the carousel.

In the plane I  sat next to Lena from Austria and Jeffrey from Brooklyn and we had a lot of fun. Lena had to pass the long immigration line when Jeffrey kind of just walked through. So we met again at the luggage carousel and waited for our stuff to come rolling to us.

Thanks to her I was able to get all my stuff outside the security zone, because I had my big backpack and the small one as hand luggage plus two big boxes full of chocolate and something else for one of the next competitions.

It would have taken me hours to get my backpacks and the boxes outside and I'm so thankful that she helped me out on that one. Thanks again Lena! You rock! She had to wait for her connecting flight to Minnesota for like five hours (and it was delayed by another 5 hours or so).

Once outside the security area she watched over my stuff so I could distribute the Mannerschnitten amongst the people there.

At first I thought that it would take forever because there were so many Mannerschnitten in the box, have a look yourself:

The people in the waiting area were really grateful for the chocolate and the distraction I provided them with. Most of them asked me what I was doing here and why I was wearing this costume. Amongst them was an olympic youth team and they all tried the Schnitten and loved them!

After about 1.5  hours of giving away delicious Mannerschnitten I had to say goodbye to Lena and went looking for the driver who would bring me to my hotel in New York City. Sadly I had to wait and ask some Americans to borrow their phone to call them. When he arrived and we went to the vehicle I was stunned. I had not at any moment expected to be driven to the city in a limosine! 🙂

So we drove towards the island of Manhattan and the landscape was simply stunning! 🙂

I checked in at the hotel and the guys at reception already knew about the Blogger Challenge and were pretty excited about it as well! I was given a room on the 12th floor – I had no idea what that meant, but omg the view and the room were  amazing! I could see the Crysler Building from my balcony!!

And did I mention what everyone should do or is doing when entering a hotel room?! let me show you: