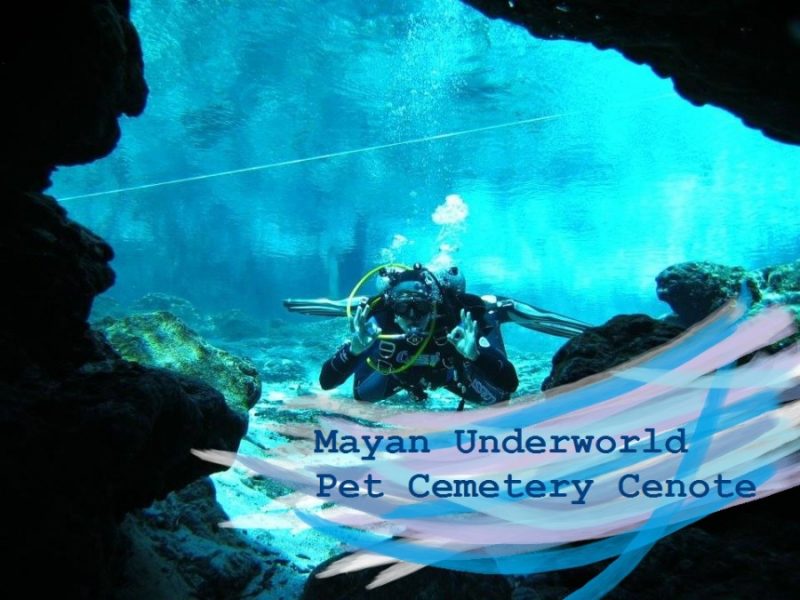 Yucatan has the world’s largest underground rivers system, there are over a thousand of them and hundreds of miles of water filled tunnels beneath the limestone surface of the Peninsula, they are called CENOTES and there is nothing like it anywhere else in the world.

The underworld of the cenotes is probably one of the most beautiful things I’ve ever seen. The water is around 23 C° and incredible crystal clear, there are hundreds of different formations everywhere, the roofs are covered entirely by beautiful and extremely fragile stalactites and creating almost a surreal mirror effect with the stalagmites all over the floor and even more, beyond those tunnels and caves that stretch away into the blackness.
Maybe just a third of this huge underground water system has been explored. The feeling in the cenotes is so inspiring that it feels like as soon as you dive in you are transported to another world.
Cenotes were formed during periods of lowered sea levels about 10, 000 years ago and are mainly formed from limestone and calcium carbonate, they were a very important ritual centers for the Mayan culture. Mayans believed they were doorways to the underworld, hence why so many archeological remains found.

One of my favorite cenotes is called Pet Cemetery due to its animal remains found on. It has two different caves in it that I love for its unique and extraordinary beauty, one of them is called the Blue Abyss and truly my favorite is the Dark Side of the Moon.

So let’s take a short trip to The Dark Side of The Moon.

Everything starts in one of the most gorgeous entrances to a dive site I’ve ever seen, a very rustic wooden staircase that’s leads to this incredible turquoise blue crystal clear water, you jump into the water with about 50 kg of equipment ready for a 3 hours dive, swim in the surface for about 15 minutes surrounded by such a spectacular cavern that I start to understand why Mayans believe they were sacred places.

Finally I get to the point where I have to submerge and start the dive, I follow a continuous guide line all the time so I don’t get lost in the immensity of the cave, 5 minutes right after the dive there is this place full of columns so astonishing that your eyes barely can resist not to cry, then you follow that line right through a few large rooms, small and even smaller right in where there is just enough space for you and your tanks, then you get to this place in where the formations looks like ice-creams cones upside-down you keep going thinking that is impossible you find something better than that and then you get to this room entirely covered by the most beautiful and unique formations that looks like crystal straws, all translucent and so thin that literally you can break them with the exhaust of your bubbles, and the cave goes and goes until you get to this place so tiny that you can barely move around plagued of this pillars for what it looks like melted wax… and this is the time my air get to the point I have to turn around and head my long way to the exit. But I know it worth every breath and every second in the moment I put my head out of the water and there is nothing but this incomparable feeling of freedom and peace.

Gustavo has been travelling the world since he was 14 years old. At that young age ee went to Japan all by himself to live and study with monks for a year. He came back to Mexico City, where he is originally from, to finish school. Gustavo started university in Mexico and later he got a full scholarship to study in Cambridge, England.

After that he decided to work on cruise ships. He travelled the seven seas for over six years working on the bridge of the ships.

Three years ago he settled down in Playa del Carmen, Mexico. He is the most passionate cave diver I know and his incredible photographic memory is like another guiding line. He will not get lost down there!