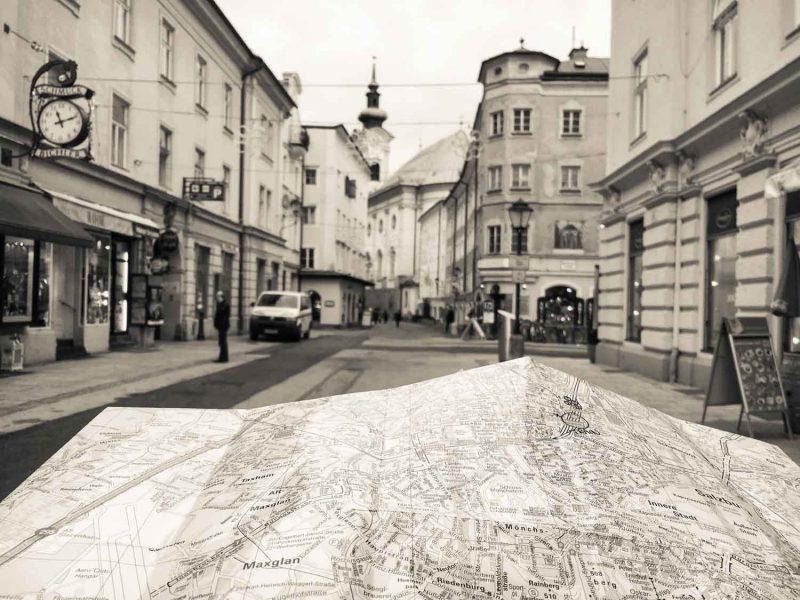 Experience Salzburg offline – with city map and no phone

Let’s admit it, smartphones can be super helpful – yes, even turn into real lifesavers. However, I’m catching myself again and again as I use my Kastl (as I affectionately call my phone – that would translate to box) just too much and simply grab it out of sheer boredom – and leave the books on the shelves. At the end of the month, I’m disappointed that I did not read as much as I had planned. Too much time wasted on Insta or simply browsing – when I noticed that I spent too much time on Facebook, I  immediately deleted the app on my Kastl – since then, I’m actually much more relaxed.

A short narrative before I take you to the actual story: a few years ago, my then Kastl said goodbye to me after it had fallen on the tile floor. The first two days felt really weird and empty, but after that, I felt better. With every minute without the Kastl in hand or in the bag, I had so much time. However, I had to spend some time preparing for the next day – instead of getting directions quickly via Google Maps, I printed out directions and city maps to get around. (Of course, I could’ve asked strangers on the street as well.) One week without my Kastl – I still like to describe this week as one of the best weeks in my life – but due to work and this blog, I had to get a new Kastl.

A few weeks ago I went to beautiful Salzburg. The mission of the day trip was to test a city map of Salzburg and leave the Kastl in the bag. On said day, however, it was so cold that the Kastl decided within a few seconds that it’s time for some winter sleep and was not to be woken up. Okay, because that’s how I was able to focus on the city map.

During my walk in Salzburg, I strolled through a part of town called Andräviertel, which attracts visitor with its small shops and its modern, hip soul, but also through the beautiful old town, where the cold air was filled with enticing smells. Many people rushed past me frantically and I got several weird looks when people saw my paper city map. Whether I got lost or was looking for an address, nobody seemed to care.

By not looking at my phone and getting directions served to me, I discovered many details I wouldn’t have seen otherwise: decorative elements on houses, the busy faces of people passing by, street names and much more.

After a cosy break, in a small café in the old part of Salzburg, my Kastl awoke briefly – but I decided to keep it in the bag. Not being able to be reached and being offline was just wonderful and such a rare occasion.

Tips for a trip with city map and no Kastl

Are you someone who would rather navigate with Google Maps or do you rely on your map reading skills?

A big thank you to Marco Polo for the lovely cooperation and the time offline. It’s been a pleasure as always.