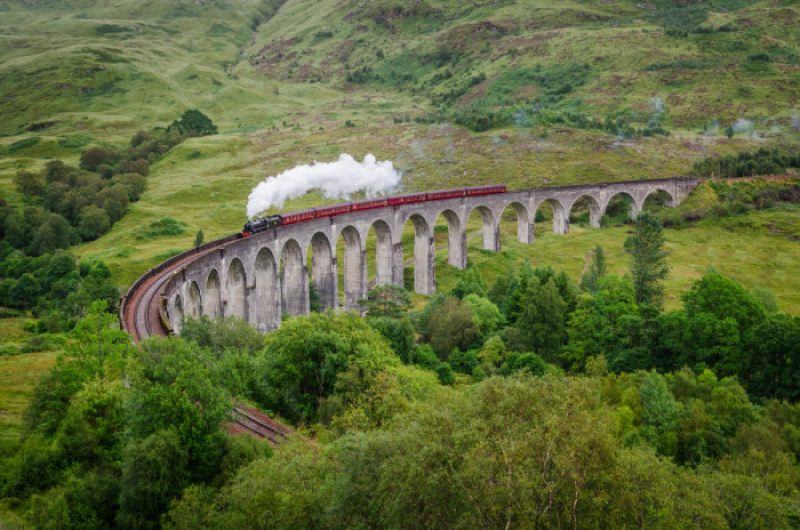 Some of you might wonder why I’m so fond of Scotland!? Mhhhh let me tell you this: I went there without knowing that it is a Harry Potter fans real life dream! Not only did JK Rowling start writing the legendary Harry Potter series in Edinburgh, but also finished them there!

Submerge yourself even deeper into the magical world of Harry Potter while listening to the soundtrack here.

Let me show you 17 places around Scotland that look just like in the movies. This might save you from visiting “The Wizarding World of Harry Potter” in Orlando, but then think about it again. Scotland is not a theme park, or is it? A real life theme park for Harry Potter fans!

JK started to write parts of her books here. This is by far the most touristy place and brags with being related to the famous wizard. A huge sign let’s you know the following: “This is the birthplace of Harry Potter”. From what my research has shown that isn’t quite the truth.

The coffee shop itself is still very nice and the atmosphere is great. Go there, have a cup of tea with fresh cookies and start the day with this view:

Some say JK wrote her books also here, some say she didn’t. It doesn’t matter which side is right, because this is simply great! I urge you to go and visit!

From the inside it looks like some of the shops at Diagon or Nockturn Alley. The only downside is that no magic potions are sold here. I’m pretty sure there are some Slytherins amongst the guests in here and enjoy the dark atmosphere.

And some other rumours say that JK sat here while creating Harry Potter. This coffee shop is located directly above Black Medicine.

For the best feeling of wandering through Diagon Alley you have to visit Grassmarket in Edinburgh. The shops there sadly don’t sell wands and magic books, but you can imagine shopping there for your first year in Hogwarts.

I found this tour on my very last day in Edinburgh and I knew how to spend the evening! A couple of students who all wished to be part of the Harry Potter world for real made it real for them. They invented The Potter Trail, which is a free guided tour through whole Edinburgh.

They usually do the tour dressed up as wizards and witches and hand out wands for some magic tricks! They tell you some great stories of Harry Potter and JK Rowling herself and how Edinburgh’s influence is found throughout the books. She did a marvellous job writing the series, but she mainly described Edinburgh and Scotland.

In 2008 JK Rowling received the Edinburgh Award to honor her work.

JK went name-shopping at this graveyard in the middle of Edinburgh. There are two characters to be found buried here.

Tom Riddel exists!!! There actually was a man named Tom Riddell and he is buried in Greyfriar’s Kirkyard. Somehow hard to find, but once you stand in front of his grave you will be amazed. Not sure how this poor man ended up being the name patron for the Dark Lord.

William McGonagall borrowed his name to Minerva McGonagall, you will find his tomb there as well. He is known as the worst writer in the history of English literature. What a remark, right?!

There are houses like in Hogwarts, they wear uniforms that look pretty good, the school is more of a castle than anything else, … It’s located in the middle of Edinburgh city and you can get a look from Greyfriars Kirkyard to it.

In February 2007 JK Rowling finished the famous Harry Potter series in a suite of the Balmoral Hotel and left a statement on a bust there:

JK Rowling finished writing Harry Potter and the Deathly Hallows in this room (652) on 11th Jan 2007.

The suite has then been renamed to JK Rowling suite- sadly it’s about 1000£ per night.

Edinburgh Castle aka Hogwarts and Hogsmeade

Enter Glasgow Cathedral and you will be blown away by its architecture. For me it felt like walking through the Great Hall of Hogwarts except for the candles in the roof.

Harry and Ron fly over the Glenfinnan Viaduct and the Hogwarts Express in the blue flying car.

Those two lakes could have been the lakes that were shot as the Hogwarts lake with the kraken in it.

During summer time the Jacobite Steam Train departs from here and looks just like our beloved Hogwarts Express.

For your orientation I made a map with all the locations mentioned above to find on your trip in Scotland!

Keep on travelling! And keep the magic alive!