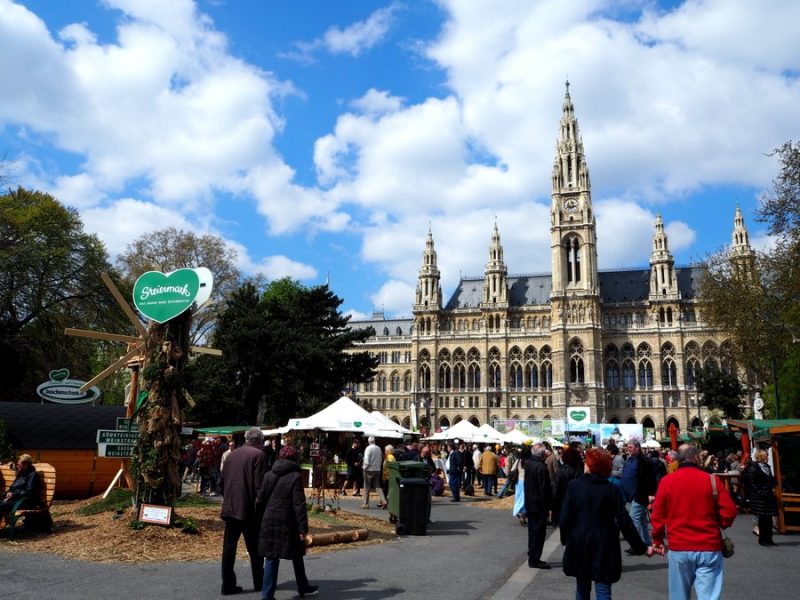 For the 19th time the so-called Steiermark Frühling – Styrian Spring took place on the Rathausplatz in Vienna from 16th to 19th April 2015. More than 150,000 people enjoyed the busy festival.

The huge square in front of the Viennese City Hall turns into Styria: representatives of different tourism regions, vintners, farmers and amazing typical local food can be found. Some also offer some giveaways and entertainment like walking on stilts or climbing.

But wait – do all Austrian states have such a great festival in Vienna??

The answer is no!

But why Styria and not any of the other seven states?

Styria is known for its apples, wine, mountains, pumpkin products (especially pumpkin seed oil), green endless fields, and so much more. People from all over Austria come to enjoy the beautiful countryside and also the capital Graz.

The idea formed some 20 years ago because many Viennese people had spent their holidays in the Oststeiermark, the Eastern part of Styria, to enjoy the countryside and escape the capitals hustle for a while. Most of the people kept returning to this special region in Styria for years and years on end.

They then decided to bring Styria to Vienna and celebrate a festival every year. The first few festivals were held under the name Regular Visitor Festival.

Since then the festival evolved and got more and more popular and hence attracted new visitors and people who have never been to Styria as well.

Why you should go as well

Experience Austrian culture as its best! Go there and learn (more) about the different regions in Styria, their food, music, their wine, their great outdoors and so much more. If you happen to have a Dirndl or a Lederhosen – dress up!

When is the next Steiermark Frühling?

This very special and very nice hotel is just a short 5 minute walk from the City Hall and perfectly suited for occasions like this. You will love the stylish boutique rooms, the high ceiling and of course the breakfast. They only serve local food, therefore you won’t find bananas that were shipped thousands of kilometers but fresh Austrian apples.

If you arrive at the Central Train Station, Hauptbahnhof in German, take the bus number 13 to the stop Laudongasse/Kochgasse. The bus ride takes about twenty minutes!

What is your favourite festival? Let me know in the comments below!