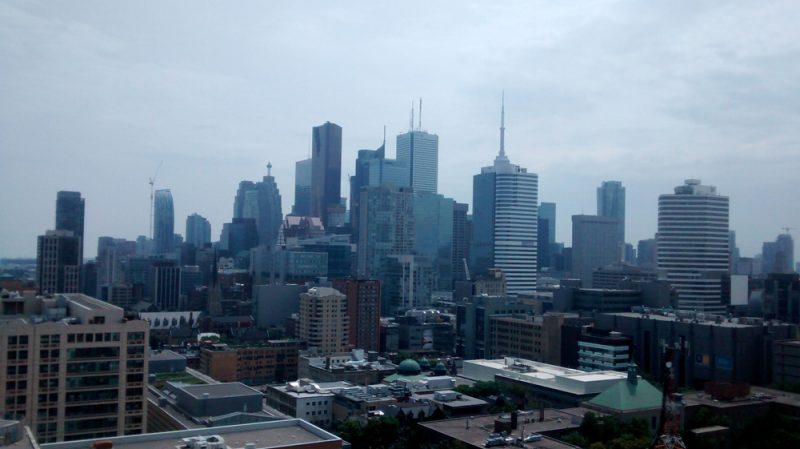 Welcome to the biggest city in Canada, which also happens to be the capital of district Ontario:

When I drove into the city with my rental car I just thought to myself: “Where’s all this cars coming from?” To be honest: Driving into Toronto is just terrible – thousands of cars, 12 traffic lanes (six in each direction) and the non-continuous way of driving, stopping all the times, then speeding up again and stopping right after. The good news: Once you get to your exit and get off the highway it’s gonna get a lot better – I promise!

The weather wasn’t too nice when I arrived but I still went to see the important things throughout the city.

The island is just offshore and can be reached by ferries which leave from the Ferry Dock down on Bay Street (there is only one – so you cannot accidentaly go to another one). The ferry price in summer 2014 was 7 CAD, there are some discounts available for students under 19 years. The ticket is sold round trip and you only need to show the ticket when leaving for Toronto Island as the ferry is the only public transport to go to the Island. You can choose to go to three different places on the island, actually it doesn’t matter where you go, because you can easily walk across the island within little time. I chose to go to Centre Island and not to Ward’s Island or Hanlan’s Point because it was the ferry that left right after I bought my ticket. The ferry usually runs every 30 minutes and takes about 10 minutes from the mainland to the island. You can look up the schedules here; during the day you just go there, get a ticket and go on the next ferry, so there is no need to really “schedule” when to go there. Even though it states on the website that there is waiting time I didn’t have to wait at all, there were enough people still.

On Toronto Island you’ll encounter a lot of people having a picnic, playing sports and enjoying the outdoors. There are a lot of families and groups of friends that escape the busy city.

The heart of the island is probably the Centreville Amusement Park – perfectly designed for children – I enjoyed watching them laughing and having a great time. There are some carousels and rides for them. They also have a little zoo with some lovely animals to visit for free. I’d say this was among my favourites on my stay on the island.

You can also rent a bike or kayak to get around the island or simple walk around and enjoy the great view around the green island and amazing view to Toronto’s skyline with the landmark CN tower. For the lazier ones there is also a tram which shows you around the entire island in about 30-40 minutes. It’s a guided tram so you will get some further information about Toronto Island itself.

After visiting the Island I went on Yonge Street – which is the main street downtown. I was lucky because the street was closed for cars for the Live Green Toronto Festival. There were little stands presenting their support for a greener environment such as electrical cars, biodegradable articles, environmental friendlier aids for the household and everyday life and also fair-trade clothing. I really enjoyed it a lot and got inspired by it. I think every city or town should move more towards saving and helping the environment and providing information about how to do so.

Make sure to check out if there is any free events in Toronto when you go there, you probably find some great things to discover. When I stayed in Toronto there was the Live Green Toronto Festival, another festival on Toronto Island and Katy Perry was in town as well.

My most favourite part of Toronto was the lesbian, gay, trans and bi district “Church–Wellesley”. It’s home to the annual Pride Week which is the largest festival of that kind all over Canada. They decided to redesign the common zebra cross-walk in the village and painted it in rainbow colours instead. You may not like it but that’s up to you. I think it’s a great step into a greater and better future together accepting everyone as they are or want to be. Go for it Toronto!

Last but not least my recommendation for accommodations:

Have you ever wanted to stay and study abroad and get the feeling of student housing? This is why I decided to stay at Neill Wycik Summer Hostel which is located downtown the city, only two blocks away from Yonge Street. During the year it is home to over 700 students from Canada and all over the world, in summer they have to pack their things and the student residence is transformed into a hostel and hotel. Free breakfast and awesome staff await you there – plus make sure to check out the rooftop terrace with the great view all over the city all towards Toronto Island. I stayed in a 4 room apartment with two bathrooms and a big kitchen and common room. My room was pretty small but okay for the time I stayed there. It’s nice for a couple of days but the rooms and bathrooms could use some renovation and thoroughly cleaning. Note: there is parking lots and WIFI available for extra charge. The WIFI was 4 CAD per day (10 CAD per week) and the parking lot is around 10 CAD per night. If you don’t want to pay the fees for WIFI there’s a starbucks just on the corner on Gerrard with Church where you can escape the WIFI costs and surf there.

I hope you enjoyed this post – let me know in the comments below! 🙂