Bogotá for Foodies – a Guide to the exceptional Colombian Cuisine 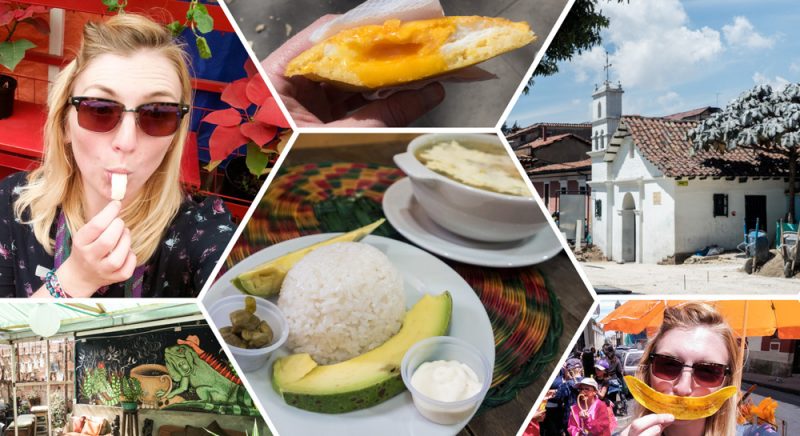 Colombia is known for its excellent coffee – I can’t quite confirm it since I don’t drink any. But Colombia has so much more to offer than just this hot beverage. Together with La Mesa I toured through the streets and tried so many delicious dishes, snacks and drinks in the capital. The following yummy things were part of the walk:

= corn dough filled with pretty much anything – egg, cheese, meat, … you name it!

I do like Colombian Arepas, but they are by far not as tasty as the ones from Venezuela. If you ever get the chance to try some, go for it and think of me!

= hot chocolate! Colombians loooove cheese and they also put it in their hot chocolate! Might sound a bit crazy, but trust me – it’s delicious! Another very popular hot beverage is Agua de Panela – and they add cheese as well!

= fermented corn drink – tastes like Austrian Most or Cider.

Chicha is a very typical Colombian drink and it is even prohibited! But Colombia wouldn’t be Colombia if that made people stop drinking it. So it’s illegal, but the authorities don’t bother prosecuting.

A while back there were quite some problems in Colombia, because people drank too much and were too borracho too often. Also the beer lobby was on the rise and started some campaigns agains Chicha – people should drink beer instead. The result: Chicha was prohibited.

In La Candelaria – a barrio of Bogotá – you’ll find many bars that sell Chicha. On most doors some signs with “Hay Chicha” are found – that means “we have Chicha”.

Try to see if you like it – I prefer a fresh Limonada instead.

FYI: Chicha is also known in other countries, eg. in Venezuela. But there it is a rice drink and yes it’s just yumyumyum!

= soup with three different types of potatoes (papa criolla, papa blanca, papa roja). It’s served with chicken and corn – since I arrived in Colombia I haven’t eaten meat, but the soup together with rice and avocado was heavenly!

I just talked about the amazing Limonadas here in Colombia (and all over Latin America). Especially tasty is Limonada de Coco and Limonada de Hierbabuena. You’ll find small stores or vendors everywhere.

Colombia is a paradise for fruit-lovers like me – there’s so many fruits that don’t even have a proper word in other languages AND the fruits are sooooo cheap!

Guanabana – a bit sour, but good!

You’ll absolutely love this! Patacón and plantains in general are often served as sides. There are so many different bananas and plantains in Colombia, I lost track. Some of the fried plantains are very dry and chrunchy, some are juicy – I like the those one the most.

= corn dough filled with pork and vegetables. As I already told you, I don’t eat (much) meat, that’s why I only had some of the dough. Not my taste, but if you like meat – you’ll  like it!

More yumyumyum dishes that you need to try in Colombia

This is how avocados are sold in Colombia

Mango with salt and lime

I took part in one of La Mesa’s Food Tours in Bogotá (they do offer tours in other Colombian cities as well). Three hours walking through the city with a guide and seven stops with food and drinks. I’ve described most of the food and drinks we had in this blog post. It’s truly a pity that our guide didn’t know much about the origins of the local dishes and lacked food vocabulary to tell us more about the ingredients. A few weeks before I had joined the Free Walking Tour and their guide knew soooo much about the food and Chicha!

The La Mesa Tour costs 50 US$, which I find quite a lot of money for that little food. Note: We didn’t get full plates, we just got to try them, I was still hungry after the tour. Note: I didn’t have the Tamal because I don’t eat meat. The food we got during the tour has an approximate value of 7 US$.

Another thing that bothered me was that I was asked if I didn’t like anything when I signed up for the tour. I told them that I didn’t eat meat and I’d prefer veggie, but was willing to try some of the meat dishes. On the spot, the guide asked again about preferences and I told her no meat for me please – which she arranged partially.

I was really looking forward to the tour, but it wasn’t really what I expected it to be. Maybe because I had already known all of the dishes we tried during the tour.

Those of you that don’t have much time in Bogotá (and have 50 US$ spare), and still want to learn a bit about the city and the local dishes, go ahead and book with La Mesa.

Alternatively, I highly recommend the Free Walking Tour, there you’ll also try some typical dishes and drinks! There’s also a Free Food Tour that a friend took part in and liked it too. Sure they have a different business model in mind, they work on tips – you only give them tips if you like the tour – and I LOVED IT.

Those of you that have more time, I’ll recommend just walking around the Candelaria in Bogotá and you’ll find many places that serve those dishes. Most of those you’ll find also in different parts of Colombia.

So, enjoy it! Buen provecho!

Note: I got invited to take part in this tour. Of course, La Mesa was not happy with this article and asked me not to publish it. “If you are unwilling to change anything in your blog, then we would prefer you not post it.”