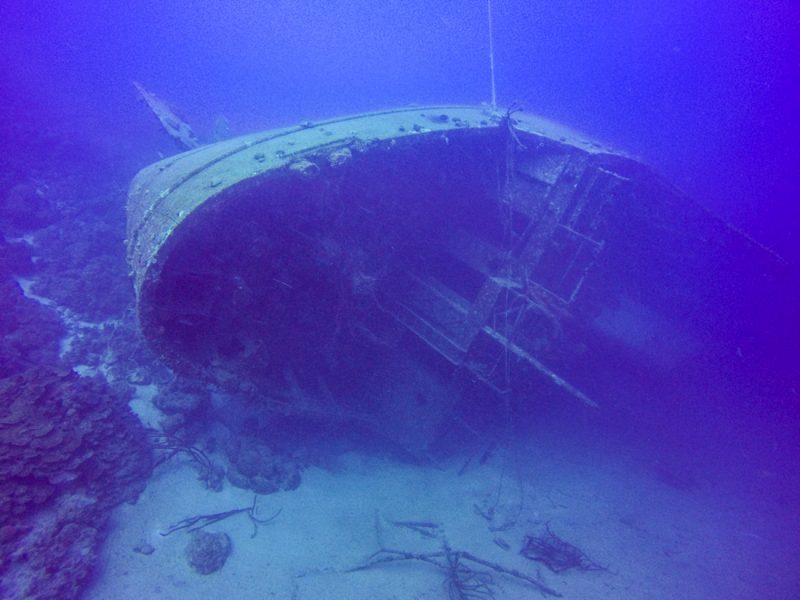 I don’t know about you but a cold shiver runs down my spine every time I spot something man made under water. Even though I have explored a couple of wrecks in Mexico, the Hilma Hooker on Bonaire is definitely the biggest wreck I have ever encountered.

Even now, while writing this article, I have to take breaks. Exploring a 70 m freight ship is indeed scary.  The visibility during our dive also was not the very best and so I could not see the whole ship at once (which makes the whole thing a bit more monstrous for me).

Before I tell you about the actual dive, I would like to keep you out of the water just a little longer:

Why did Hilma Hooker sink?

Some stories seem too unreal to be true. Just like this one:

When the Hilma Hooker struggled with motor problems on the way from Panama to Venezuela in 1984, the team stopped in front of Bonaire. However, they did not want to go on land and rejected the locals offers to help. Local authorities soon became wary and examined the ship in the port of Kralendijk.

The discovery? Eleven tons of marihuana!

The Hilma Hooker was then confiscated and since the ship was in such bad condition, the local diving schools began to mumble about possible places for it to sink. The owner did not want to pay for the repairs and berthing costs. It was pulled from Kralendijk to another berth in the South of the island.

The authorities didn’t come to an agreement with the ship owner as no one wanted to repair or to tow the ship. Only a few days after the Hilma Hooker was pulled to the new berthing place, she sank in the morning hours in a few minutes. Shortly after the first divers descended to explore the ship. Since then, she has been lying on the coast of Bononia waiting for visitors.

The entrance to the dive site Hilma Hooker is quite simple: there is a parking lot and at the southern end of it, you will find a few yellow stones that mark the entrance. Further out you can see two buoys, which make the dive easy to find.

So we swim on the surface to the northern buoy and then start our dive. A bit farther out into the ocean lies Hilma Hooker diagonally from the reef at about 31m. This depth makes it accessible only to Advanced Open Water divers, but you can also dive over the ship without descending to 31m.

We start clockwise around the wreck – I am feeling slightly queasy because the view is not all that great and is limited to about 12m (which is not bad in itself, but on other dives, we had better views), We can not make out the entire ship. Admittedly, a 70 meters view would be too much asked, but even in the middle of Hilma it is not possible to see both ends.

At the southern end lies the bow of the Hilma Hooker. A few fish nibble on the ship but were not disturbed by us. As we descend to the left of the ship,  just over the sand floor, the deck extends in front of us. The top of the ship’s mast is partly buried in the sand. A few divers may have laid one of the ropes of the Hilma Hooker in a heart shape on the ground.

With butterflies in our bellies, we dive along the entire Hilma Hooker and in the corner of my eyes, I see movements on the deck. Two large tarpons vigilate in the shadow of the ship and peer out – as if they warn us not to come nearer.

As we leave the wreck behind us and explore the reef towards the coast, I am relieved. If you do not want to see a wreck, you can still experience a beautiful dive here.

Depth: max. 31m. For less experienced divers: you can also dive over the ship at a depth of 18.

Entry: easy and shallow – yellow stones mark the street and beach, use the buoys for orientation

Level of difficulty: easy but deep

Have you ever been wreck diving? How do you feel about it?