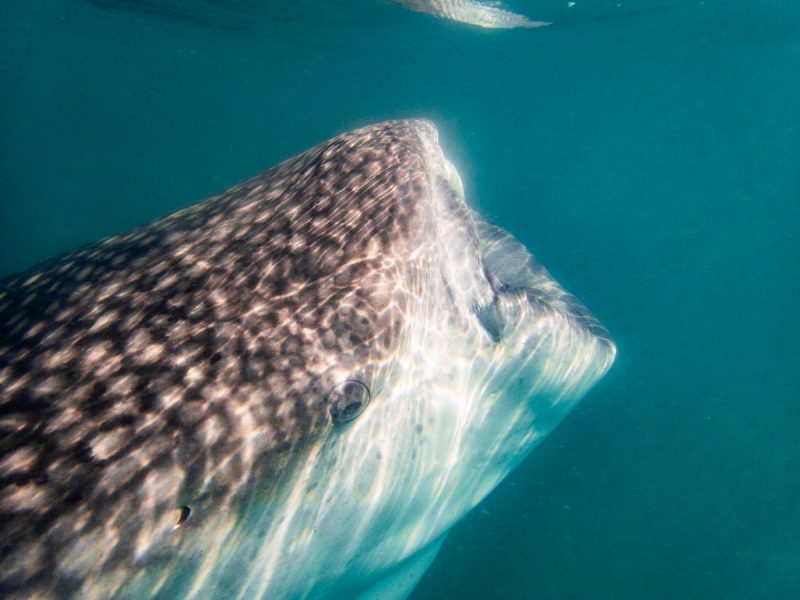 On my last trip to Mexico I ended up on the Baja California peninsula. I’ve long dreamed of going there, and I was excited that it was coming true! And while I spent most of the time scuba diving in and around Cabo San Lucas, I spent the last full day of my trip with a day trip to La Paz. For a few months each year you can go snorkelling with whale sharks there, and that was my plan! In this blog post, I’ll share all about my absolutely great, relaxed and self-organized day trip from Cabo San Lucas to La Paz:

Shortly after seven o’clock, I left my hotel in Cabo San Lucas for the bus terminal Águila to buy my ticket from to La Paz at 7:45 am. Since I didn’t visit during high season, there were still enough bus tickets. I wanted to catch some sleep on the way to La Paz, but the passing landscape fascinated me too much. It was ever-changing and I couldn’t close my eyes for long.

After a little more than 2.5 hours, the bus arrived at its final stop: La Paz Malecon. As I left the bus terminal, a breeze of salt air blew towards me and I set off to find my guide for the day.

Miguel expected me already at the agreed meeting point and at shortly before 11 o’clock he brought me then to the dock, from where I went on board of a small ship. Miguel did not come, he was the one selling the trip on land. Once on board, everyone spoke Spanish, and I was pleased to use my rusty vocabulary again. Rafael – our actual guide – explained us heading to the whale shark spot the rules how we should behave in the water.

“Always keep a good distance to the animals and never touch them. On the one hand, this is forbidden, and on the other hand the skin of the whale sharks can be very rough and you can hurt yourself quickly”, he explained to us. Everyone hung on to his words and couldn’t wait to get into the water to see the whale sharks.

Unfortunately, the visibility in the water was a lot worse than I hoped, and so I had to swim right next to or almost on top of the whale shark to be able to spot it at all – the photos may be deceiving. Nevertheless, my heart beat fast with joy and since the whale sharks were still juveniles, I could keep up with them (unlike the snorkelling trip in Yucatán with fully grown whale sharks, which are incredibly fast). I didn’t think about it, but it was still a bit exhausting to swim after the whale sharks, and so we climbed back into the boat after approximately ten minutes. We repeated snorkelling and getting back on the boat three or four times before the captain dropped us back in La Paz – all of us smiling happily and satisfied.

On the recommendation of the boat crew, I decided to have lunch at the restaurant Casa Vieja and was really amazed by the Sopa de Tortilla – which I highly, highly recommend. Not only was the portion huge, but it also tasted fantastic and was not expensive.

Before I had lunch, I had already noticed some colourful walls in La Paz. During lunch, I tried to research some of them online and after a short walk through the neighbourhood, I found quite many – what I liked most about them were the many ocean and water interpretations!

As it was getting later, I had to think of the return journey to Cabo San Lucas, so I stopped at the bus terminal and bought the ticket for the next bus, which left one hour later. Meanwhile, I sat down in the cosy nearby Café KM-0 and enjoyed a big cup of Chai.

Tips and Recommendations for a Day Trip to La Paz

➵ The whale sharks are usually in La Paz from October to May. During this time you can book snorkelling trips and are almost guaranteed to see the whale sharks.

➵ Even if you arrive in La Paz and haven’t booked a tour, you can find lots of operators along the promenade for little money.

➵ In order not to disturb the whale sharks too much, there are time slots and a limited number of boats that are allowed to stay near the animals. During my visit there were 14 boats in a time frame of two hours each. The first boats leave around at 9:00, the next at 11:00 and at 13:00.

➵ Use a biodegradable sunscreen when snorkelling. I’ve been using the ones made by Stream2Sea. The chemicals used in conventional sun creams do not only harm aquatic life, but also humans. Additionally, a Lycra shirt can help to prevent sunburn.

➵ For the bus trip, take a sweater or a thick scarf and use it as a blanket, as the air conditioning system – as so often in Mexico – is set to Ice Age mode.

How much is a Day Trip to La Paz including a Whale Shark Tour?

➵ Organized tours leaving from Cabo San Lucas can be pretty pricey and cost around 190US$ and more. Since I organized the day trip myself I saved a lot of money:

➵ If you prefer to book a complete package with driver and everything, Jay from Dive Ninjas in Cabo San Lucas will be happy to help you out.

Have you ever been snorkelling with whale sharks? Where did you see them?

Pin this for later!