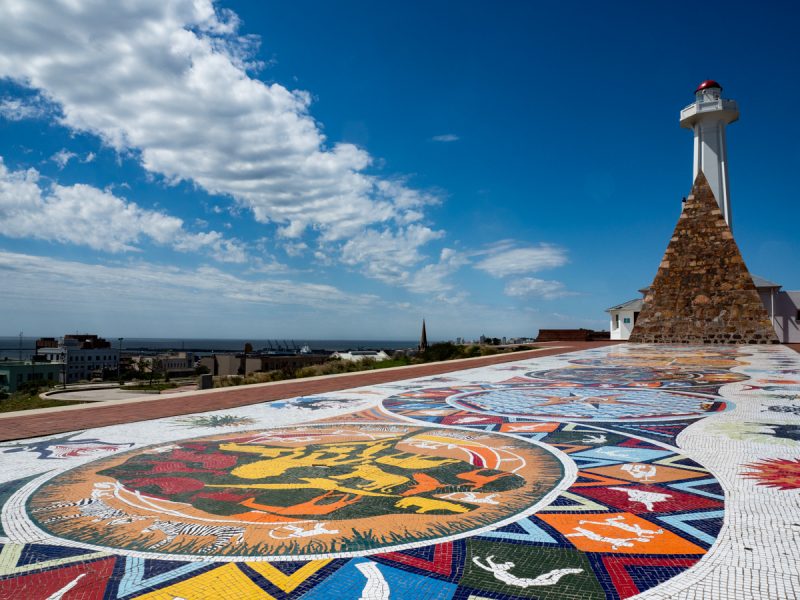 To be honest, travel guides and many other travel bloggers don’t have much to say about the South African coastal town of Port Elizabeth (PE for short) – if they mention it at all. For this reason, I had already prepared myself to explore the sea rather than the mainland. Fortunately, we should all be wrong because PE really surprised me: The dreary-looking industrial city of Port Elizabeth has its own charm and offers a lot of activities you can do in the surrounding area:

Like in Cape Town there is a rescue station for wounded penguins in Port Elizabeth. The injured birds are brought here to regain their strength and as a result are released back into the wild as soon as they are well enough. Some of the penguins have been seriously injured and have suffered permanent injuries, so they call the Rescue Station their new home. The guided tours are very informative and I can highly recommend them to you. However, they only take place if there are enough volunteers available.

Less than an hour from downtown Port Elizabeth is the third largest national park in South Africa: Addo Elephant National Park. The park is divided into 8 areas and stretches like a fan around the city. The national park also includes the islands St. Croix, Brenton, and Bird Island as well as large parts of Algoa Bay. Two of the areas are particularly suitable for wildlife watching on land: Addo Main Camp and the adjacent Colchester.

We started our day trip in the southern part of the park – in Matyholweni Camp. From there we drove some loops and saw the first animals: elephants, warthogs, water buffalos, ostriches, zebras, kudus, meerkats, turtles, antelopes and many more.

Shortly after arriving at Addo Main Camp, we took a game drive with a guide at 12:00. Unfortunately, we weren’t very lucky and most of the animals were busy with a midday nap in the bushes. Also, our guide was not very talkative and didn’t give us any information about the animals – the fee was not worth it!

At noon we stopped at the restaurant in the Main Camp. Unfortunately, it remained below our expectations. Next door there is also a colourful souvenir shop.

We spent the afternoon driving through the park. We filled our cameras with lots of pictures of warthogs, zebras and of course elephants.

Tip: Plan to spend a whole day in Addo Elephant National Park. At any time of the day, different animals are active. Especially early in the morning or late in the afternoon, when the sun is low, the light is optimal for fantastic photographs.

The real reason why I ended up in South Africa is the Sardine Run. An adventure of the extra class that should be on the bucket list of every diver, snorkeler and ocean lover. I spent almost two weeks in PE. With a group of German-speaking divers, we spent several days in Algoa Bay and out on the open sea looking for sardines, dolphins, whales, and sharks. Nature cannot be forced, and so some days were indescribably breathtaking with thousands (!!) of animals and on some, we saw only a few schools of dolphins.

↠ Info: the adventure Sardine Run must be booked up to two years in advance. Some spots are also available later or on request. You can find more information on the website of Expert Tours, the tour operator that offers tours around the Sardine Run in Port Elizabeth.

For those who want to pay a short visit to Port Elizabeth and still want to observe dolphins and whales in the sea, humpback whales and right whales can be seen in Algoa Bay between May and December with a little luck. The tours start in the harbour of Port Elizabeth and a reservation is absolutely necessary.

If you search for photos of Port Elizabeth, you can’t miss the colourful pictures of Donkin Reserve. The park was named after the city’s founder Donkin and has a fantastic view of Algoa Bay. Especially impressive is the carpet of colourful mosaics that flows into a pyramid standing in front of a lighthouse.

In memory of Nelson Mandela, Route 67 was founded in Port Elizabeth. The 67 places in the city mark the 67 years of Mandela’s life. The Whites Road Wall is one of these places. White buses have been attached to the wall next to the road and the description is:

“History is often shaped by momentous events, while cities with their alleys, streets and avenues are formed by the layered rhythms of the daily necessity.  This rhythm of place, shaped by the everyday, becomes the song of the city.”

Colourful house fronts can be found not only in Bo-Kaap in Cape Town but also in Port Elizabeth. The Alfred Terrace adorn houses in bright colors that are just waiting to be photographed.

Especially after a day at the sea or in the game reserves, a walk along the coast is worthwhile. Especially in Summerstrand, there are some beautiful wooden footbridges that meander through the sand hills and landscape.

Another possibility to see African wildlife up close is the Kragga Kamma Game Reserve. This private zoo is conveniently located just 25 minutes from Port Elizabeth city centre. Kragga Kamma has a manageable size and can be visited in half a day or 2-3 hours. In addition to zebras, giraffes, rhinos and many other animals, cheetahs also live in a separate enclosure in the park. You can either search for animals in your own car or join one of the guided game drives in an elevated safari vehicle. Unlike in Addo Elephant Park, the guide in Kragga Kamma Game Reserve provided us with lots and lots of information and stories.

South Africa surprised me several times a day with breathtaking moments. Likewise on the evening on the sand dunes in Sardinia Bay where I saw the sun disappear from the horizon and watched a magnificent play of colours in the sky.

Tip: Take your dinner with you to the sand dunes and enjoy a Dinner on the Dunes!

South Africa has never disappointed me on my month-long journey when it came to finding good and above all very inexpensive food. Port Elizabeth has become a Mecca of great restaurants for me. Among my favourites are:

Pro tip: Great souvenirs from local artists can be found in the Wezandla shop in the city centre.

Have you read my other articles about South Africa?

Pin this for later