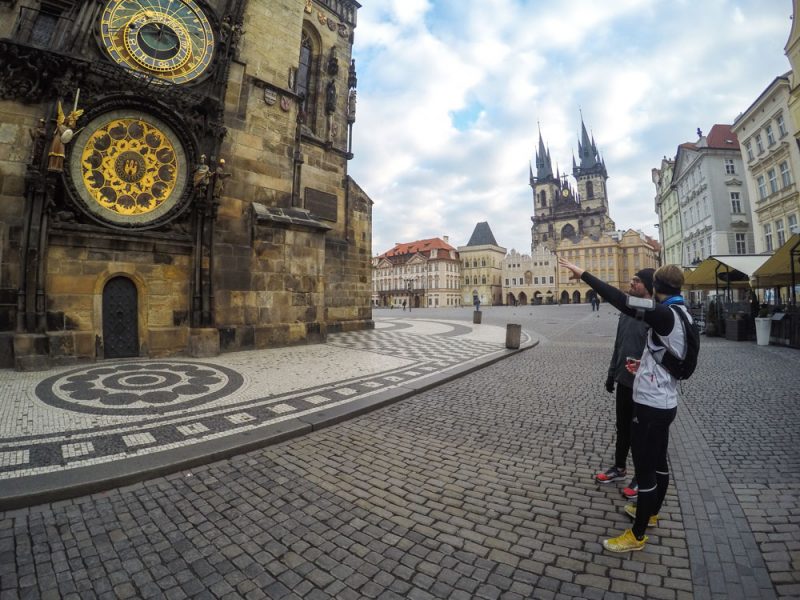 How to spice up a weekend in Prague

Who of you dream of a weekend away from home? Who wants to experience more than the usual sightseeing and checking off bucket list items? Who is looking for a weekend in an inspiring and vivid capital in Europe?

So: Start dreaming and planning your next trip to Prague!

I want to share with you some uncommon yet super fun things to do in the Czech capital that will leave you with just one thing: wanting more!

Morning run through the city

Running has become a passion a couple of month ago and when I found out about combining it with sight seeing I was convinced! Whenever I travel I find it hard to exercise but not so this time.

I decided to book my bf and I on a running tour operated by Running Tours Prague. We agreed on a time and I told them the address of our hotel.

Michael picked us up at 8am sharp. We agreed on a route with about 12km, which is great for Prague as you can cover many spots.

We stayed in a hotel located on the Western side of the city, about 10 minutes from Charles Bridge. We started our tour by crossing the bridge Most Legií, passed the National Theatre Then I lost track of where we were running and enjoyed the run.

Somehow we made it to the Old Town Square where Michael explained a lot about the Astronomical Clock about how it moves and what it symbolizes. We made it to the Jewish part of Prague and then crossed Charles Bridge. The last part was up to Prague Castle which was beautifully quiet and seemed even abandoned because of the early time.

As we ran Michael continued to give practical and useful information about the buildings, streets and other topics related to the history and being of Prague. We both enjoyed our time a lot and will start running in more cities.

My bf is quite a beer enthusiast and I love tapas – when I came across the Beer and Czech Tapas tour I was thrilled and immediately booked us for Saturday night. In the confirmation email it said to meet on Wenceslas Square and to come hungry!

Pete was easily spotted with his red hood, as was I with my Austrian hat.

We started at a place called Vinohradský Pivovar, where we had two different beers and the best pork brisket I’ve ever came across! Accompanied by cabbage and potato dumplings – heaven for foodies like me!

We continued to Kulovy Blesk that clearly is a bar for students and people who seek different beers – with almost every visit. Draft beer is the magic word here. You’ll never find the same beer selection in this bar twice!

If you like sausages, this bar is definitely for you. Sour sausages and home made chips are you friend on long nights out.

FYI: For the beer nerds and travellers to Austria: If you get a glass of beer that is mostly foam the waiter most certainly has to pour another one as the guests are very demanding.

As for the food part in this restaurant: I loved the sweet pancakes with pear yam and whipped cream. Mhh, delicious!

For our last stop Pete had picked a restaurant with the name Prazsky most u valšu. It is a cosy restaurant with a great atmosphere and the cellar looks just perfect for having a great night out with friends until the morning sun rises.

We not only had great beers – a lager and dark lager, but also some beer schnaps (pivovice) and absinth. A plate with different mouth watering cheeses was served with the liquor.

We had a splendid time together with Pete who is a great story teller and beer enthusiast. We’re already looking forward to meeting him again on our next trip to Prague.

If you wonder how it is to bathe in beer continue reading my previous article about the Bernard Beer Spa.

Prague is simply a great city to spend a few days and come back again and again. I’d say it is one of those cities that get better every time you go.