Skydiving in Luxembourg – in my Dirndl 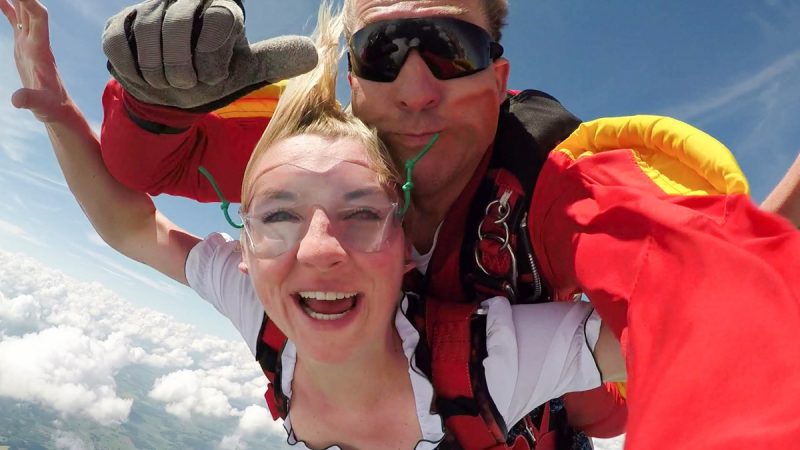 After my first skydiving jump in New Zealand  was an incredible experience, I have tried again and again to jump out of a plane. In Chile, the weather wasn’t nice enough and in Canada, we should’ve booked weeks ahead. But this week in Luxembourg I was signed up for another skydive!

My fear of height annoys me from time to time, especially when it comes to viewing platforms or staircases where you can look through the stairs – and then, sometimes I’m not bothered by heights at all. I can still remember how nervous I was in New Zealand before my first skydive – there were too many people, too much was happening at once and although I made a friend at 4000m, I was very nervous. The first few seconds free falling were terrible, but then the adrenalin and the purest joy took over!

Actually, I wanted to go scuba diving in Luxembourg, but that turned out not to be possible (or organizable) –  but hey, everything happens for a reason. Because that’s the only reason why I looked for other activities and read about an airfield in the north of Luxembourg, in Wiltz. My credit card came to action and 260 € less / later I received the confirmation for skydiving by email.

Why not jump out of the plane in my dirndl? You do everything else in your dirndl as well? Some similar thoughts occupied my mind before the jump and after my tandem jumping partner Jens had no objection to the dress, it was already fixed! Jump into the sky in a dirndl!

Luckily, the weather was just perfect – the sun was shining happily and a few clouds decorated the sky.

Jens took the time and gave me instructions, everything calmly and in a fun way – I felt wonderfully taken care of. Also because I was the only “customer” who was scheduled to jump at 1 pm – I was actually quite calm and just looking forward to it. Jens pulled all the straps of my harness tight and there’s nothing in the way of our adventure: we were the first ones to crawl into the small plane and waited there for the pilot and the three solo jumpers.

We took off and left the grass highway behind us. The plane climbed higher and higher. I was fascinated by the world passing by outside the window. The solo jumpers couldn’t have been bothered less and started to read a Portuguese language course and their kindle. When we hit 2000m I realized that I was not nervous at all. I didn’t quite know how I felt. Somehow empty. But then joy took over. Before we made it to 4000m, Jens tightened the straps again. Then they opened the door.

I had to admit to myself that I wasn’t too calm, but certainly not nervous. I had to hang my feet outside the plane’s door and put my head on Jens’ shoulder. My attempt to get a hold of the plane fails. And then… the world turned around me and we fell.

This incredible feeling of freedom. There are no words to describe it! Probably a mixture of AHHHHHHHH and AMAAAZZZIING come close somehow.

I was able to enjoy the few seconds in free call and cry out with joy!

Then Jens pulled the leash and the parachute opens. I couldn’t believe it’s all over again – and we were not even back on the ground. Jens manoeuvred us through a cloud and we spin down to earth quickly.

He then shouted FEET UP! and landed. As if the winds didn’t want us to go, they send one more gust of wind and the parachute covered us completely. We couldn’t have cared less.

Come along! Skydiving in Luxembourg

Further Information on Skydiving in Luxembourg

I decided to go skydiving in the North of Luxembourg in a city called Wiltz.

Have you ever tried skydiving before? Where did you go or why haven’t you tried it yet? Let me know in the comments – I’m curious!

Pin this for later