San Andrés Travel Tips – a Paradise for Divers with Perils 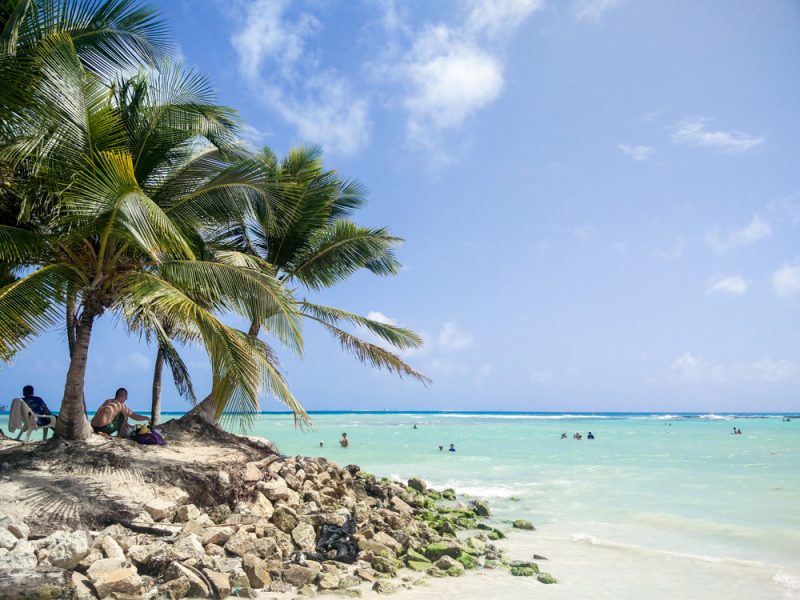 San Andrés Travel Tips – a Paradise for Divers with Perils

A two-hour flight from Bogotá, off the Nicaraguan coast, is a little island paradise – or at least that’s what I was promised by many Colombians and Google image search. It is a paradise for divers, but the rest of the island did not impress me at all. If anything, it got me thinking…

I flew with Viva Colombia and landed in San Andrés around 11 pm. Viva Colombia is even worse than RyanAir but more about this another time. Since my hostel was only about a kilometre from the airport, I decided against getting a taxi. Which maybe wasn’t the best idea. I got stopped by police and the copper could not believe I was walking to my hostel – alone at night. He shook his head and gave me a lecture about how dangerous this part of the island was. Ouch! He radioed his colleague and they took me to my hostel on a moped (without a helmet I may add!). The hostel owner was also already super worried when we got there. Not a good start for San Andrés und I.

I had a really long chat with the hostel owner where I was staying and found out about the following things:

What can you do in San Andrés?

DIVE! DIVE! DIVE! And that’s exactly what I came here for. I spent 4 days on the island, 3 of them diving. I booked with  Blue Dive Life and it was so much fun! The equipment is safe, the guides deliver amazing briefings, the dive sites aren’t too far from the shore and everything is done with a smile. Diving here is cheap cheap cheap! I paid 180€ for three full days. Nowhere else has been this beautiful AND cheap.

I don’t think San Andres would be a good choice if you are not a diver or into relaxing at the beach. I was really bored on the day I didn’t go diving. I rented a scooter and drove around the island to keep myself busy.

Exploring the island on a scooter

My hostel offered to rent me a scooter for 70000 Pesos (ca. 23€) for a day, so I could explore the island on my last day. Once more I was advised to be careful and that safety is an issue on San Andrés. I was told to leave my backpack in the hostel and store my things in the compartment under the moped seat instead. Don’t forget to lock up your moped – apparently, mopeds get stolen too.

Without breaks, you can drive around the island in about an hour. There aren’t all that many places worth checking out but I did find a few places I enjoyed. Here’s my list:

Ecofiwi – Mangrove wood: a nice short stop for a quiet walk through the mangrove forest. A wooden path leads through the trees and from time to time you can spot birds. There are two viewing platforms where the forest isn’t as dense.

Rocky Cay Beach: I am not usually a beach bum, but I stopped here to stretch my legs. Parking is free if you consume food or drinks at the Aqua Beach Club.  The beach is quite small but beautiful. You can wade/swim (in chest high water) to the small island Rocky Cay. Heads up: the beach is full of street vendors trying to sell you all kinds of knick-knack which I found to be super annoying.

Places not worth visiting:

Are you a  sun worshipper? Lots of small islands are scattered around San Andrés, some of them you can also visit. Your reception staff should know how to get to them. Packages are offered but they are rather expensive.

Places for Foodies on San Andrés

Donde Francesca: You can find this restaurant in the Sound Bay. It is right at the beach, and you can enjoy your food on their sun terrace. I ordered shrimps and hands down, they were the best I have ever eaten. The main course was served with Fruto de Pan, a potato like veggie local to San Andrés, and coconut rice. Yummy! Definitely a dish you should try!

Aqua Beach Club: The ceviche here is absolutely amazing but the portion sizes are rather small. This is the place to go if you are only feeling a bit peckish.

Peru Wok: the ceviche in this restaurant wasn’t as good as the one I had in the Aqua Club, but it was served with mango and avocado which was absolutely amazing. Peru Wok also has a sun terrace overlooking the endless sea. You can see the island Johnny Cay from here.

I decided to stay at the Karibbik Haus Hostel, it’s not right in the centre, but only a short walk (10-15 mins). Here some more details about the hostel:

What I thought about San Andrés

The island itself isn’t really worth a visit, the diving is absolutely beautiful, spectacular and easy. Check out the Colombian mainland coast if you are after a relaxing holiday on the beach.

I am unsure about returning to San Andrés. Safety is important to me and this island is way too dangerous for my liking. I am toying with the idea to visit the neighbouring island Providencia instead. It is supposed to be just as nice and much safer.

The street vendors roaming the beach and constantly trying to sell me stuff definitely annoyed me.

A lot of the houses are rundown and their yards are covered with trash.

How to get around