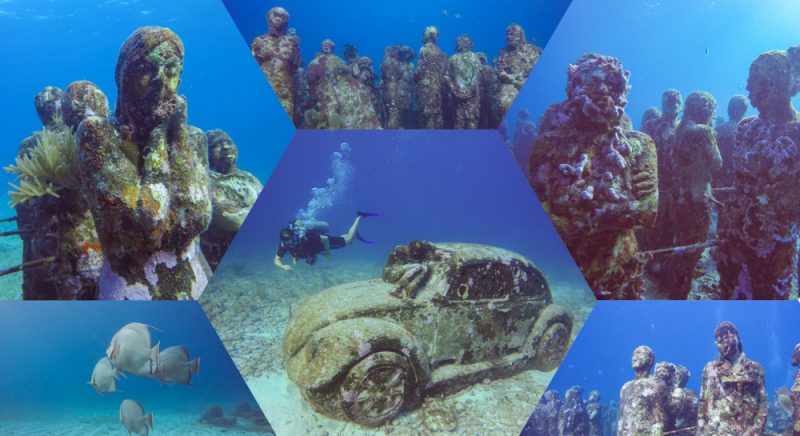 A few years ago I first heard of MUSA – the Museo Subacuatico de Arte. Ever since I wanted to dive there and see it all for myself. This Underwater Museum was built aka sunk back in 2009. It’s not even the only one in the world – there’re others in the Caribbean and other places too, where you can find many sunken treasures.

We’re starting right in the morning when we meet with Gilberto in his dive shop Carey Diving. Everything goes smooth and quick and no time is wasted – just how I like it. Also, the equipment that is handed to us is in good shape. Then we meet our guide for the day: Sydney from Canada – she escapes the Canadian winter and lives on the island.

Equipped we walk a few meters from the dive shop to the boat – I’ve never been on the boat that quickly! The boat is one of the smaller ones that I’ve seen for diving and doesn’t have a roof – but it’s not really necessary anyways (I’ll tell you why shortly).

As we leave the docks, Sydney starts her quick but detailed dive briefing. And after a thorough buddy check, we get into the refreshing water with a backroll. Quickly we descend and after a few meters, this is the first curiosity I encounter:

My first thought: how much did Volkswagen pay to have a Beetle sunk here on the bottom of the sea?

Of course, the car is not a real one, but it’s a special mixture so it wouldn’t rust or decay underwater. I especially love the holes in the windows – why? Fish love to play hide and seek too and before I can even think about it, some fish are curious enough to pop out their heads and observe us divers.

We leave the Beetle behind and keep going in a certain direction. The visibility is good today, still, I can’t catch a glimpse of anything other than sand. Only after the Beetle is invisible a huuuugggee group of statues appears.

It’s kind of creepy to see those sculptures on the bottom of the sea. I think about a night dive here and I immediately get goosebumps.

I’m going as slow as possible and try to identify some facial features and expressions. Some of them seem to just stare, others look as if they were in pain or if they had a big burden to carry. I can’t spot a single happy face in this group. It almost seems like they don’t want to be here. As if they feared the sunlight, and froze by the first sunbeam, where at night they turn into living creatures.

My tank is still more than halfway full thanks to the shallow dive site, but yet we have to say goodbye from this strange but unique place. Sydney signals to ascend and those wonderful angelfish come to say hasta pronto.

Why you should visit MUSA Isla Mujeres

Because it’s something different. You won’t find any reefs in this part of the underwater museum, but the corals already grow on the sculptures as if they’ve been there for a long time.

I spent half a day – 2 tanks – with Carey Diving on Isla Mujeres. Gilberto and his team were friendly and patient from the first email on. Also, they emphasise safe diving.

The equipment is in good shape, the boat too – and you don’t really need a roof for shades here. The surface interval is super short thanks to the shallow dive sites (approx. 10m).

Gilberto and some of the staff do speak good English (which isn’t too common in Mexico). We had a great time with them – looking to diving with them again soon!

Dive Time: 39 minutes (could be a much longer dive because it’s so shallow)

Time of the year: good all year round, we went in January

Characteristics: different sculptures and statues from various artists were sunk in 2009. You’ll find cars, sole statues, groups of statues and other artworks. The ocean has accepted those intruders and started to cover them with corals.

Important: the museum stretches between Isla Mujeres and the Hotel Zone in Cancun. Because of the distance, it is not possible to see all artworks in a single dive.

Conclusion: worth seeing & worth diving

Have you been to the MUSA? Or any other underwater museum?

More on Mexico from me