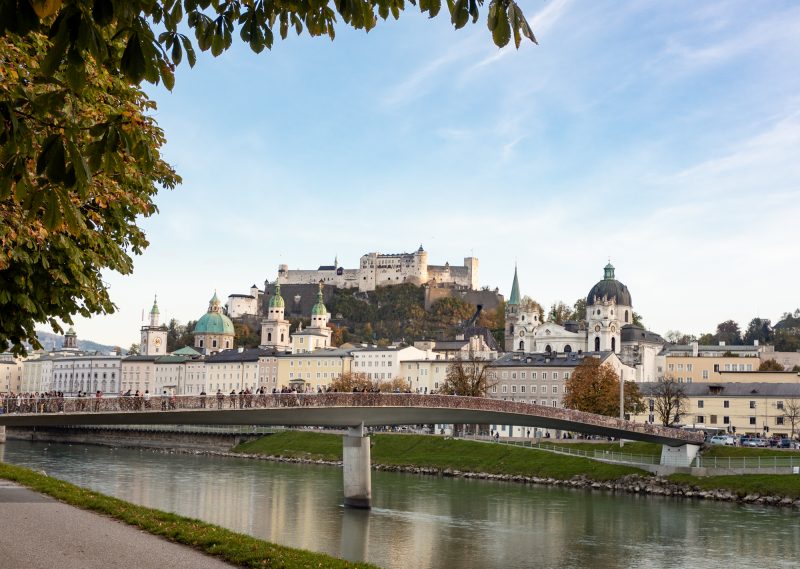 Salzburg is a city that you can travel to over and over again and yet discover something new every time you visit. On my last trip to Salzburg, I went looking for what isn't quite obvious and chatted with some real Salzburgers about their city – and got some funny stories to hear. In this blog post, I'll tell you some fun facts and worth knowing background information about the beautiful city of Salzburg.

Salzburg holds a profession that is unique in the world. For more than 350 years, the professional group of mountain cleaners has ensured the safety of the inhabitants of Salzburg. After a rockfall in 1669, 230 people lost their lives. Today, twelve mountain cleaners inspect over 300.000 m² at Mönchsberg, Kapuzinerberg, Nonnberg, Festungsberg, Rainberg and Hellbrunnerberg and ensure that loose rock is no danger to anyone.

There are 13 different Mozart balls in Salzburg – why?

The delicious chocolate praline was invented by confectioner Paul Fürst in 1890. At the 1905 World Exhibition in Paris, his Mozart ball (Mozartkugel) was awarded the gold medal. Since it was not usual at that time to patent ideas, the praline by Paul Fürst was often copied and adapted in order to be able to produce it industrially and to meet the great demand.

Today you can find thirteen different Mozartkugeln from different companies in Salzburg. However, only the Konditorei Fürst is allowed to use the name “Original Salzburger Mozartkugel”.

The original Mozart balls have a nipple

Another interesting fun fact about Salzburg and its sweets: The original Mozart balls from the confectionery Fürst are still made by hand today. Pistachios and nougat are first shaped into a round form and then dipped in chocolate on a wooden stick. When the dark chocolate is solid, the stick is removed and the hole is filled with chocolate again. This creates an uneven Mozartkugel – with a navel or nipple.

Mozart was not Austrian

During my last visit to Salzburg, I discovered that the famous composer Wolfgang Amadeus Mozart was not Austrian at all. But he was not German either. Salzburg was not part of Austria during his lifetime. Mozart was born in the Prince-Archbishopric of Salzburg which was an ecclesiastical principality and a state of the Holy Roman Empire. Therefore Mozart is a Salzburg citizen. This is probably my favourite fun fact about Salzburg.

Mozart was christened Joannes Chrysostomus Wolfgangus Theophilus. Amadeus is the Latin form of Theophilus. He himself signed only as Wolfgang Amade.

The hut where Mozart wrote his opera The Magic Flute, at least in part, still stands today. It is said that he did not write there quite voluntarily and was temporarily locked up by his commissioner to bring the piece from his head to paper. Today the Magic Flute House is located in the Bastionsgarten (bastion garden) of the Mozarteum Foundation and can be visited at events and on request. You can also catch a glimpse of it from the Mirabell Garden.

The hangman as godfather

Silent Night, Holy Night is today the most famous Christmas song in the whole world and has already been translated into 320 languages and dialects. In 1816 Joseph Mohr from Salzburg wrote the text of the song as a poem. What many don't know and what was quite surprising for me when I found out was that his godfather was the executioner of Salzburg. Since Joseph Mohr was an illegitimate child, nobody wanted to take on this role. It is also interesting that the executioner himself was represented by someone else at the christening.

The musical film Sound of Music is mostly unknown in Austria. Why does the whole world know the film, most of which was shot in Salzburg, but we Austrians don't?

Sound of Music was first broadcast in the USA in 1965 and only 35 years later in Austria. The film received bad reviews in German-speaking countries, low viewer numbers and was generally a failure. Since then, the five-time Oscar-winning musical film has only been broadcasted a few times on ORF (Austrian broadcasting corporation). Maybe it's because Sound of Music was staged too kitschy and too American?

During the six festival weeks in July and August, with over 200 events, more than 250,000 visitors flock to Salzburg. The various events are divided into three areas: drama, opera and concert – so there is something for everyone.

And my next fun fact about Salzburg is again about something typically sweet. The Salzburger Nockerl are a popular dessert, especially in the province of Salzburg and in parts of the Salzkammergut. Invented by the mistress of a Salzburg prince archbishop in the 17th century, the three hills of sugary beaten egg whites represent Salzburg's snow-covered local mountains – the Mönchsberg, the Kapuzinerberg and the Gaisberg.

The man on the gold sphere has a wife.

If you stroll through the centre of Salzburg, you cannot get past the Kapitelplatz. The man on the giant gold sphere can be seen in many photos of Salzburg. But what hardly anyone knows is that the man on the gold globe is only a part of the artwork Sphaera by the German sculptor Stephan Balkenhol. The man's wife on the gold ball can be found in the crevice in the Toscanini courtyard.

More about Salzburg from me

A perfect day in Salzburg

Liked this blog post? Then you'll enjoy these as well

Skiing and winter activities in Obertauern

Tips for a great day in Linz

Road trip through the south of Styria

Relaxing at Tauern Spa in Kaprun

A summer weekend in Bad Gastein

Find all my blog posts about my home country Austria here

Pin these fun facts for later